Merdekarya claimed that the couple had been making trouble since 2015. 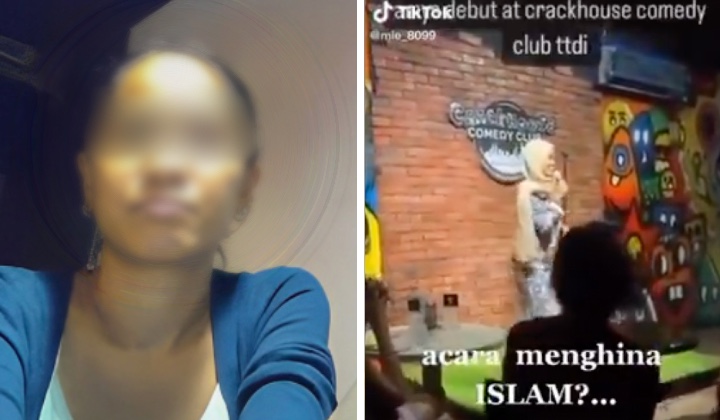 A live music venue recently shed light on a woman who insulted Islam in a comedy show at Crackhouse Comedy Club in Taman Tun Dr Ismail.

In support of Crackhouse Comedy Club, which was penalised by the authorities, Merdekarya alleged that the woman and her boyfriend had previously tried to tarnish its reputation.

Through a posting on Twitter, Merdekarya claimed that Alex, the woman’s partner, always visited Merdekarya’s bar around 2015.

After receiving many complaints from visitors about Alex’s immoral behaviour, Merdekarya gave Alex the option not to visit the bar or stop his behaviour.

Alex chose not to come back to the bar. However, he and his partner Amy had visited the Merdekarya bar last month to propose an event.

It is said that the event to be organized involves stand-up comedy, Alleycats performances and even sex workshops.

Unsatisfied with the request being denied, Alex and Amy did not pay for their food, amounting to RM75.

Merdekarya also received death threats and treachery to burn the bar from Alex on social media and WhatsApp.

Not only that, but Merdekarya customers also received threatening messages that they would perish in a fire if they visited the bar.

Apart from that, Alex also wanted to bring down the reputation of the Merdekarya bar when he claimed that the food sold deceived Muslims when selling pork when the menu clearly said there were pigs.

Amy has also commented that she has ‘eaten’ pork in her meal at the Merdekarya bar.

Merdekarya lodged a police report, and Alex was detained by the police, charged in court, pleaded guilty, and was released with a compound of RM100.

The recent trouble started when Amy, clad in a baju kurung and a headscarf, was seen introducing herself.

In a 53-second video, she claims to be a Muslim woman who memorized 15 verses of the Quran.

As soon as she finished introducing herself, Amy opened the hijab and baju kurung she was wearing.

She revealed her real clothes, a sleeveless shirt that exposed part of her chest and a short skirt that showed part of her thighs.

Her actions received cheers from the audience who were present to watch the performance.

Merdekarya added that Alex and Amy’s plan was to use the local art stage to promote their sex cult, and if the place did not allow them, then they planned to use the authorities to close the venue.

Many had defended Crackhouse including popular comedians, saying that Crackhouse KL was innocent.

The police have since arrested a suspect concerning the case.

According to Astro Awani, a 28-year-old woman was arrested at 10.45 pm at Taman Jaya, Jalan Gasing.

Police also confiscated several items, including baju kurung, a tudung, a short skirt that the suspect had worn during a comedy show and a mobile phone.

The suspect was remanded for three days starting until 12 July and is being investigated under Section 298A of the Penal Code and Section 233 of the Communications and Multimedia Act 1998.