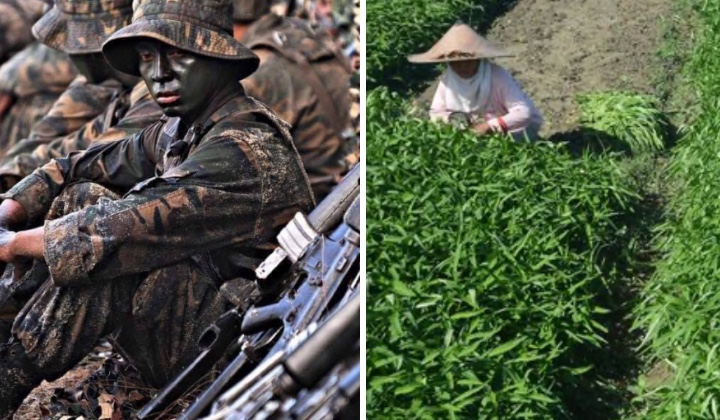 The Ministry of Defense (Mindef) intends to create crop areas in every army camp across the country to ensure food security, especially for its own needs.

Senior Defense Minister Datuk Seri Hishammuddin Hussein said the Syed Sirajuddin’s Gemas Camp in Tampin had been made a pilot project for the initial stage.

The farming activity is already there, and I’ve seen it before … so in any situation, including soaring food prices, we have our own capabilities. At least members can focus on their responsibilities of security and defence.

Hishammuddin said he will study reports to see if it can be expanded to all camps or maybe every zone.

He was speaking to reporters after witnessing the 2022 ATM Firing Power Exercise (LKT).

Zamrose, through a statement on Facebook, informed that the Army Integration Farm at Syed Sirajudin Camp was implemented through the Army Food Sustainability Program.

The goal is to help reduce the cost of living of its citizens through agricultural produce.

He said it was also an initial step in addressing the food crisis that may be faced in the future, thus ensuring food sustainability, especially among members and the community, is always guaranteed.

Meanwhile, netizens are not amused by the suggestion that the military self-sustain by growing its own food

They said the army should focus on its job and not worry about rising food prices.

Netizens also blamed the government for failing to control rising food prices which are affecting everyone except the rich, including politicians.

Others said the backlash would have been much worse if the same statement was made by former defence minister Mohamad Sabu when he was still holding the position.

Speaking to TRP, he said it was during the “Bumi Hijau” or Green Earth campaign.

He said the army needs to work out what is the purpose.

Is it for own consumption or part program to increase household income?

Vietnam’s armed forces did have such a program, giving big income to the unit and family. Nonetheless, it has to be structured and a wholesome approach is needed

In fact, in the past units/regiments had done it on their own.

For example, Lt Col Wong Ah Jit’s Military Police regiment in Terendak Camp had good productivity of vegetable crops and the harvests were shared among the families of the soldiers. Such exercise in self-subsistence farming in military camps is encouraged especially now when food price inflation is escalating.

Former soldier Captain Wong Ang Peng to TRP on the benefits of self sufficiency for the army.

Wong, a researcher with an interest in economics, politics, and health issues, said most military camps have vast pieces of land and the unused plots can be used for this purpose.

The BAKAT (wives club) members can also be organised to participate, besides the soldiers in their free time.

However, it must be reminded that the troops are not to be involved full-time in these self-subsistence farming activities.

The main role of the troops in peacetime is to train for war.

Hence, the primary duties of the troops are still training, training and training, said Wong.