The victim intervened in the nick of time to prevent another RM10k loss. 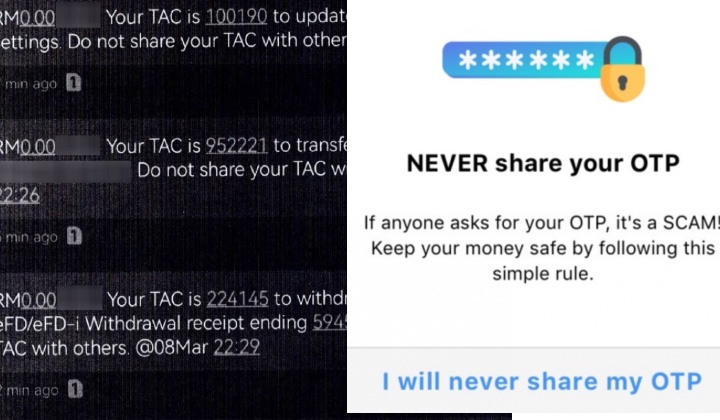 The bank account of a Chinese chef was suspected of being hacked.

After stealing RM7,000 from his account, the hacker also tried to transfer another RM10,000.

Fortunately, the 22-year-old chef noticed it in time and contacted the bank to freeze the transfer to prevent further loss.

The victim, accompanied by his family, later went to the police station to report the case and the relevant bank to file a complaint.

According to China Press, he questioned if there were loopholes in the bank’s security system, which led to opportunities for hackers.

The victim’s father said that his son suddenly received a one-time password (OTP) message from the bank on one evening, and found that RM7,000 in his bank account was gone.

Quick Action Saves What Is Left

His son immediately contacted the customer service of the relevant bank and asked to freeze the bank account immediately.

He successfully prevented the hackers from attempting to transfer the RM10,000 from his bank account.

The father said that his son had never downloaded any suspicious mobile applications and application download packages (APKs).

He added that his son did not disclose the personal information of his bank account to a third party.

Bank Refused To Owe Up

He suspected that there were loopholes in the security system of the relevant bank, which led to the possibility of hacking.

The victim and his family followed up the investigation with relevant bankers three times afterward, but were later told that they would not receive any compensation.

The father claimed that the bank did not provide relevant investigation reports, and that a report had been made with the Ombudsman For Financial Services (OFS).

He said that they had reported to the bureau that they were dissatisfied with the actions of the banks, and hoped that the banks concerned could improve their security.

You may file a dispute against any of the following OFS' Members for a direct financial loss up to OFS' monetary limit. Visit https://t.co/wzdsAT78ib to know more! #financialombudsman #OFS #ombudsman #financialdisputes #consumer #malaysia #alternativedisputeresolution pic.twitter.com/8p9eEceEgR

Can Someone Get My OTP?

One, your phone could be infected by a malware, which can be used to tap into your messages containing the OTP.

Two, you could get duped into revealing your OTP by a fraudster.

You could also be sent links that are used to corrupt your phone.

Users are generally advised to use two-factor authentication (2FA) and OTP wherever possible to enhance the security of their respective accounts.

However, like any security system, 2FA isn’t completely impenetrable.

Hackers have found subtle ways to intercept OTP text messages, so it’s up to the user to remain vigilant, identify possible hacking attempts, and take action where necessary.

Syndicate Issuing Fake LHDN Letters To Scam Taxpayers, Learn How To Spot Them