Authorities also raided a construction site with only 4 toilets for 104 workers. 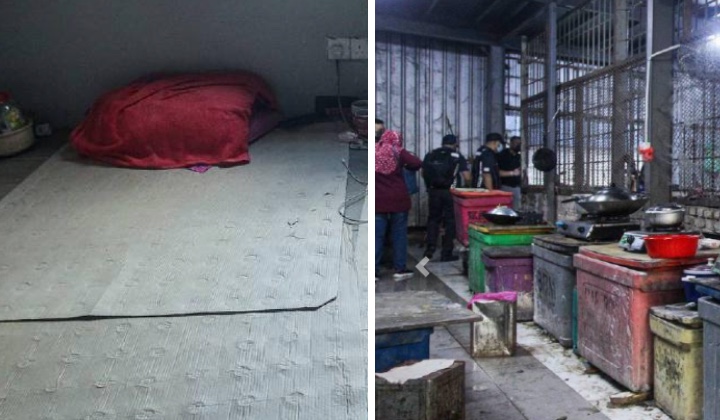 They are also dependent on their employers for health care, and the situation does not seem to be improving.

Recently, a group of 20 Bangladeshis revealed the mistreatment they faced while working for a supermarket in Bandar Tun Razak.

According to Berita Harian, the business establishment is owned by a Bangladeshi with the title ‘Datuk Seri’.

The migrant workers sleep on cardboards in a crowded and hot storeroom.

To improve the sleeping condition, they bought rubber mats using their own money.

It is understood that the owner of the supermarket has settled in the country for more than 30 years.

More amazingly, he runs a retail business with more than five supermarket branches in the Klang Valley.

The suffering of the foreign workers was revealed after the Peninsular Malaysia Manpower Department (JTKSM) conducted Operation Banteras Mega recently.

The goal of the operation is to combat the issue of forced labor and human trafficking.

The Bangladeshi owner of the supermarket claimed that the room’ was not the actual residence of the employees involved.

The ‘Datuk Seri’ said it was a resting place and the actual accommodation is 1.5 kilometres from the supermarket.

However, his testimony was found to be dubious.

There were overwhelming evidence that the store area was used as a living quarter for his employees, including a a kitchen at the back of the supermarket.

A supermarket employee who had worked there for two weeks gave his testimony.

I was not given a bed and mattress. I slept with the groceries in the store instead. We slept on boxes to avoid the coldness from the floor. I also used the toilet here to shower, while the food was bought from a shop nearby.

A Bangladeshi worker at the supermarket testifying on their living condition.

On top of sleeping in the storeroom full of groceries, he said it is hot at night and the space is infested with mosquitoes.

A construction site in Wangsa Maju was also raided by JTKSM.

He said JTKSM found several offenses committed by the employers in accordance with the Employment Act 1955, including not reporting the employment of foreign workers.

Both premises failed to apply for a Certificate of Accommodation and committed an offense under Section 24D of Act 446. The number of foreign workers employed and the accommodation provided was also unproper.

Malaysia's Top Glove, the world's largest maker of rubber gloves, had imports of its products blocked by U.S. customs authorities in what appears to be an action prompted by allegations of labor abuse.https://t.co/ja6kNDokQm