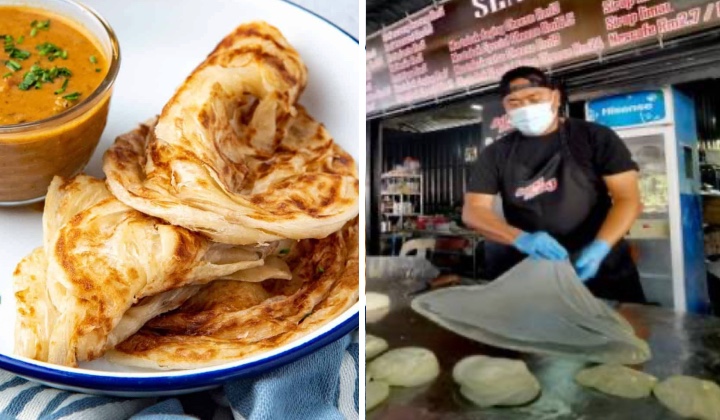 For most people, working as a roti canai maker may seem lowly.

However, the job can actually generate a lucrative income and be considered as a career.

Abang Terbang, a roti canai shop in Kuala Pilah, is testament to this.

Its owner Kamarul Rizal Kamarudin, 42, who is known Abang Terbang himself, has been ‘thriving’ in the field for the past 20 years.

Despite the lack of formal education, the father of three runs his own restaurant and employs nine workers.

Kamarul Rizal was quoted by Sinar Harian as saying that his roti canai business shows that one can have a high income without a bachelor’s degree.

People do not think much of those who make and sell roti canai like me. But in fact, it can go a long way and now roti canai makers are highly sought after by many eateries.

Kamarul Rizal started learning to make roti canai as early as 14 years old at a restaurant where he worked.

After school, I worked part -time in a restaurant as a waiter and dishwasher. There was a roti canai maker who offered to teach me.

He was taught to make roti canai using a wet cloth to soften the hands.

Since then, Kamarul Rizal has been interested in deepening his knowledge of making roti canai more seriously.

After completing his Sijil Pelajaran Malaysia (SPM), he became an apprentice to a roti canai maker in Melaka for two months.

He then took a step further by working full time for an eatery at Tuanku Abdul Rahman Stadium in Paroi, Seremban.

Kamarul Rizal worked at more than 10 eateries before opening his own shop.

For me, making a good roti canai is not easy because it requires skills starting from the flour mixture to spreading the roti canai.

Kamarul Rizal said he can sell between 400 to 500 pieces of roti canai each day.

On weekdays, the orders can reach up to 700 pieces.

He said the numbers show that roti canai has become one of the popular breakfast options among people.

Usually people who want to eat roti canai go to mamak restaurants, but in fact many are looking for Malay-made roti canai.

Therefore, he strongly encourages the younger generation to venture into the field which is now in high demand.

Mohamad Taufek had drawn criticism when he proposed the creation of a special academy to teach the skills of making roti canai in Negeri Sembilan.

The exco later clarified that he only proposed a roti canai course, and not an academy.