Same perks and benefits, but with an increased price. 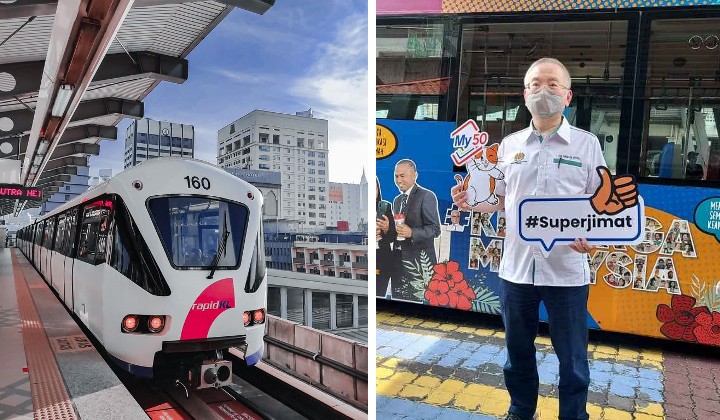 Starting 1st January 2022, RapidKL’s My30 unlimited travel pass for their rail and bus services in the Klang Valley will be replaced with My50.

RapidKL is owned by Prasarana, a government-owned company that was set up by the Ministry of Finance.

My30 was introduced in June 2020 under the National Economic Recovery Plan (PENJANA) to mitigate the economic impact of Covid-19 among passengers.

It is an unlimited 30-day travel pass for RM30 which can be used for unlimited rides on the LRT, MRT, KL Monorail, BRT, Rapid KL’s bus and MRT feeder bus services in the Klang Valley, Penang and Kuantan.

It is initially introduced for purchase from June 2020 to December 2020 but was prolonged until December 2021.

According to The Star, the My30 initiative involves a lot of subsidies and was targeted to help the people, especially from the B40 segment. It is also aimed to encourage the use of public transport among citizens.

Previously, when it was introduced in 2019, My100 allows users to ride on all rail (MRT, LRT, Monorail) and bus (BRT, Rapid KL and MRT feeder buses) routes in the Klang Valley while the My50 is only available for bus routes excluding BRT.

However, according to Bernama, starting next year, the promotion for My30 ends on Dec 31, 2021, (except for those who made advanced purchases, they will last till January 30, 2022) and will be replaced with the My50 pass starting next year.

The new My50 pass will still allow users unlimited rides for both rail and bus routes, just like My30.

The Monthly Pass Was Supposed To Cost More

He further said that a monthly pass would be valued at RM200 but with this unlimited pass subsidy, that would mean that users are only paying RM50 while the rest of the costs will be taken care of by the government.

He also added that the My50 monthly subscription in Penang, known as the Pas Mutiara will also be applicable for those who use Rapid Penang’s bus services. However, My50 is not available for Rapid Kuantan services.

Netizens Aren’t All Particularly Happy With This Announcement

On Twitter, one user particularly criticized the increase in price for the public transportation unlimited pass.

“Where’s the Malaysian Family part if you increase RM30 to RM50?

As a sign that we do understand the difficulties faced by citizens, here, we charge RM20 more.” said Twitter user, @myjoe_.

Others seem to agree with him.

“It’s not student-friendly. A lot of students use the MRT. They don’t have a lot to spend RM50 a month on this. If you lower it down, more people will use the MRT”

“What do you mean replaced? More like marking up the price”

“Maybe it’s wise for them to continue a special rebate for students, right? They can get it at RM30 only”

However, there are a few who doesn’t seem to mind the increase.

“Okay RM50 might not be really worth it BUT, RM30 was never meant to be permanent. I got it when it first started last year during MCO and it was supposed to last only a couple of months but they kept extending and extending. Now it’s more than a year already so I’m not surprised they ended it lah”

“Everyone knows the RM30 is temporary only because of the pandemic. Before the pandemic, it’s RM100 okay. It was reduced to RM30, and we’re grateful. Now, it will be increased by only RM20. Even that amount, you wanna criticize? The pass is totally unlimited and it’s actually quite worth it for anyone who’s travelling far every day. If you don’t use public transport, you don’t need to make a thing out of this.”

Anyhow, there are a lot of opinions on this matter. Well, to each its own.