Saifuddin said Malaysia is ready to assist China in the fight against Covid-19. 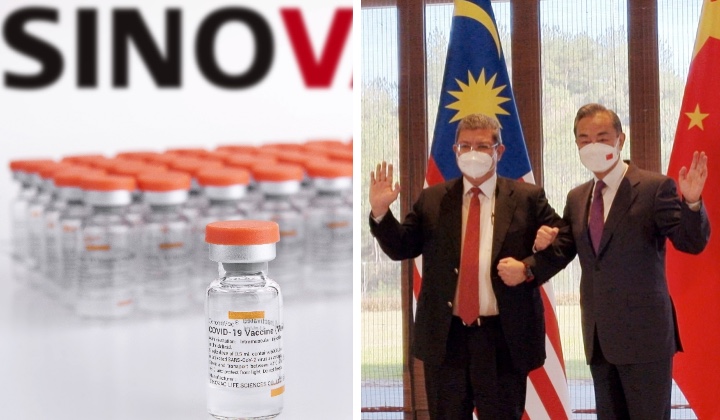 One of the signs of a real friend is that they support you when things are rough.

Malaysia received a shot in the arm in its fight against the Covid-19 pandemic with another 2 million additional doses of the Sinovac vaccine from China.

Saifuddin met Wang Yi in Huzhou, China, to co-chaired the inaugural meeting of the Malaysia-China High-Level Committee (HLC) on Cooperation in the Post-COVID-19 Era.

He said both nations stand ready to cooperate on vaccine research, development and production.

In this HLC meeting, both sides reached the final stage of concluding MoUs on Digital Telecommunications Cooperation and a Film Co-Production Agreement, besides pilot projects to facilitate the return of Malaysian university students to China.

Malaysia and China also renewed the Agreement on Space Cooperation and the Peaceful Use of Outer Space.

Malaysia also stands to benefit from China’s know-how in traditional medicine and basketball.

Malaysia and China will continue to build on our strong ties, as we recalibrate our bilateral cooperation to chart our way forward from the devastation caused by the pandemic.

In November, China also announced another one million doses of the Sinovac vaccine for Malaysia.

The doses were part of 28 million Sinovac vaccines given by China to ASEAN (the Association of Southeast Asian Nations) countries.

Working Together For Common Good

Meanwhile, Wang Yi was quoted by the English-language Chinese newspaper Global Times as saying that countries should work together in resisting actions that undermine regional peace.

He noted that this year marks the 30th anniversary of the establishment of dialogue relations between China and ASEAN.

He also said that China believes countries should be united rather than divided, inclusive rather than exclusive.

Countries should pursue a win-win agreement rather than a monopolistic one, and champion cooperation rather than confrontation.

All countries in the region should be vigilant and jointly resist actions that undermine regional peace, stability and prosperity.