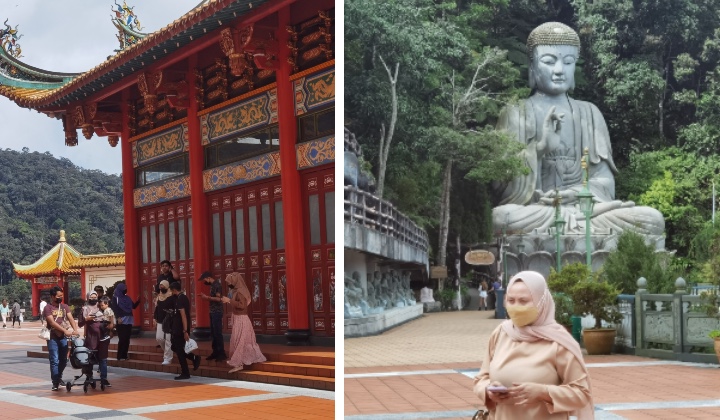 The beautiful and Instagrammable Chin Swee Caves Temple is a popular attraction to Malaysians.

Despite being a religious site, the temple is also visited by Muslims who visited the temple to appreciate its natural surroundings.

A variety of deities decorate the compounds in the form of statues, temples, altars and paintings.

Some light the heart of those with a fantastic imagination, while others are awful in nature, such as the depiction of tortures and punishment for sinners in hell.

In Islam, any kind of idolatry is prohibited.

A Malaysian Muslim visitor, who wished to be known as Wan, said he’s not perturbed by the presence of the idols.

I really don’t think there’s anything wrong in walking around the temple. I’m here to understand the culture and tradition of the Chinese people. Unless you pray to the idols, then it is wrong.

Can Muslims Visit The Non-Muslim Places Of Worship?

However, it is still permissible if the purpose is to understand the culture and tradition of others.

Explaining on previous issues in which other religions were deemed to hurt the sensitivities of Muslims, Mohd Azmi said the context is different.

He said Muslims usually have no issue with non-Muslim places of worship or religion symbols, as long as they are not located in a Muslim majority neighbourhood.

Faisal, a proponent of interfaith dialogue, added that Islam, as a universal religion, teaches love and sympathy for all humanity.

He added that more than fourteen hundred years ago, Muslims learned about coexistence from the life of the Prophet Muhammad (peace be upon him).

A Legacy Of A Renowned And Recognised Philanthropist

Chin Swee Caves Temple is a popular tourist attraction and religious site located a few kilometres before the summit of Genting Highland.

Located on a sharp, rocky slope, the site is originally a cave temple. Years of development have resulted in a vast physical complex that extends far beyond the altar space.

Reverend Master Chin Swee is a Buddhist monk from Lim’s birthplace – the Fujian Province in China.

The temple was built a year after the first resort and casino was built in 1975.

The site was chosen because it reminded Lim of the landscape in his hometown of Fujian, China.

Rome Wasn’t Built In A Day

Modern machinery was eschewed because of the steep terrain that resulted in an unusually long development period.

In 1994, the Chin Swee Temple was finally opened to the public, but additional layers were added over the following year to create the vast complex visitors see today.

Growing much from its roots, the temple no longer pays absolute homage to Chin Swee, but to Buddhism, Taoism and Confucianism.

The variety of deities associated with those beliefs decorate the compounds in the form of, statues, temples, altars and paintings.

Last year, a celebration was held to mark the temple’s 48th year anniversary.