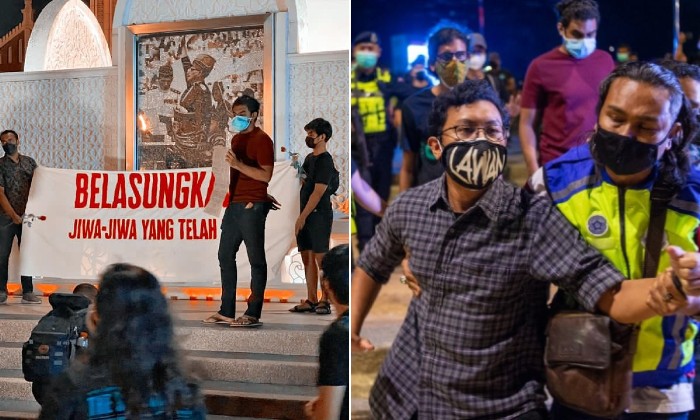 A public memorial service held at Dataran Merdeka in Kuala Lumpur last night (19 August), for the 13,000 souls who mortally fell victim to Covid-19 in Malaysia, was met with arrests and summons, with some raising accusations of police brutality.

Read More: What Happened At The #Lawan Protest?

Bersih 2.0 condemns the police high-handedness and brutality and call for the release of all participants of the memorial service of Covid-19 victims held at Dataran Merdeka tonight.

As many as 31 participants, 17 men and 15 women, were detained by police, loaded up into trucks and taken in for attending the candlelight vigil, and by the end of the night, each received compounds of RM2,000 a person.

A statement by PDRM said that the individuals were charged under Section 9 (5) of the Peaceful Assembly Act 2012 (Act 736) for failing to notify authorities of an assembly, Section 21A of the Prevention and Control of Infectious Diseases Act 1988 (Act 342) for obstructing the duties of enforcement authorities and Regulation 10 Prevention and Control of Infectious Diseases Regulations (Measures within Infected Local Areas) (National Recovery Plan) 2021 which states that no person shall gather or be involved with gatherings in a Covid-19 outbreak area.

Images and videos of the gathering being shared online have some Malaysians accusing the authorities of abusing their power in order to forcibly stop a peaceful gathering.

Police arrested 25 participants for holding a vigil in commemoration of those who lost their lives to Covid-19 at Dataran Merdeka.

🔴 The participants questioned if they were being arrested but police personnel dragged some of them into police trucks #Lawan #LawanTetapLawan pic.twitter.com/oDMwA9sc6A

Tonight was NOT a protest. It was a memorial to remember the lives we’ve lost due to this government’s incompetency and yet why is the police using excessive force to detain them?#Lawan#TolakIntimidasi pic.twitter.com/QGB4DVfByJ

STRAIGHT UP OFFENCE. SARAH WAS COMPLYING TO THE AUTHORITY. SHE DID NOT DESERVE TO BE BEATEN FOR. #Lawan pic.twitter.com/6HdtlWRqEp

We are now being asked to moved and Nalina and Yee Shan are being dragged away by force. #LAWAN pic.twitter.com/TsMaeGmWZU

It was also reported that lawyers representing the detained participants were also not allowed to attend to their clients after they were arrested until later at around 10 pm before they were subsequently released from custody.