The Taliban is said to be in the process of forming a new Afghanistan government. 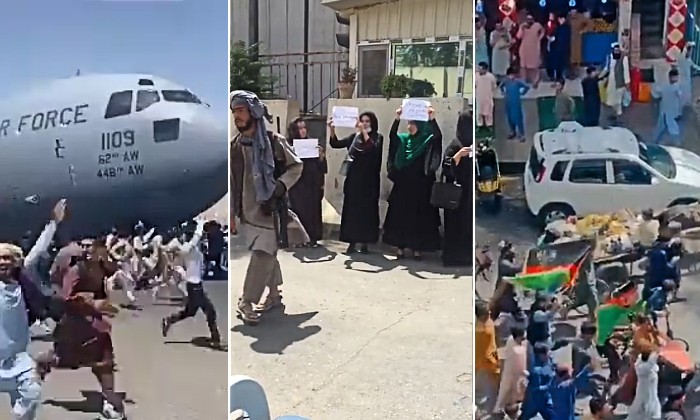 Afghanistan, a country with a population of over 30 million people, recently fell into the hands of the Taliban militant group after 20 years at war.

In just a matter of days, Taliban forces had managed to capture all major cities there before occupying the nation’s capital, Kabul, on 16 August with little to no resistance from the Afghan government and security forces.

Thousands of Afghan civilians have tried to flee the country via its airport and crossing its borders into neighbouring countries, including the country’s President, Ashraf Ghani, who’s been accused of running away to Uzbekistan with bags full of cash a day before insurgents reached the capital – saying that he left in order to avoid bloodshed.

Who are the Taliban & how did they take over?

Translating to mean “students”, the Taliban are a conservative Islamist organization that ran Afghanistan from 1996 until the United States (US) invaded the country in 2001. The United Nations (UN) had also labelled the organization as a terrorist group.

The group’s roots go back to the early 80s when it was formed by former Afghan resistance fighters known as the Mujahideen who fought a proxy war against the Soviets with the US and its allies’ help.

During their rule, the Taliban imposed their interpretation of strict Sharia or Islamic law, which was brimming with human rights violations, besides restricting the rights and freedoms of Afghan citizens.

Among them, banning most forms of entertainment, requiring men to grow beards, having women cover themselves up entirely with the burka and not allowing girls to attend school.

Afghanistan’s economy at the time was also pretty much non-existent and they relied heavily on international aid.

The US invaded Afghanistan following the events of 9/11, an attack planned by the Al Qaeda terrorist organization which was using the country as their base of operations.

The invasion managed to bring down the Taliban and in its place, the US installed a new Afghan government through general elections. However, the Taliban was never truly defeated and have remained in opposition to the US-backed administration for decades.

The US on the other hand has been trying to leave Afghanistan for years now and aim to pull all their military forces out of the country by the end of August, after having negotiated a peace deal with the Taliban in 2017 – leaving the country under its own government’s control.

However, as the US withdraws, the Taliban has been gaining control over most parts of Afghanistan, culminating in the final takeover. Despite being outnumbered and outgunned, the insurgents managed to reclaim control of the country without much of a fight from an uncoordinated and demoralized Afghan military.

Observers also cite corruption within the US-backed Afghan administration, as well as the Taliban using alternative strategies like employing social media to either appeal for, or force, local support and surrender to be the reason for the country’s swift takeover.

After seizing control the Taliban declared that the war was now over and are currently in the process of forming an official Islamic government.

Why are people desperate to leave?

Stories coming out of Afghanistan say that people are afraid of being victims of the numerous atrocities committed by the Taliban as well as being singled out as traitors for having worked with the US and the government.

Desperate citizens including women and children had stormed Kabul’s main airport in the bid to escape the country in any way that they could, even by clinging onto the outside of aeroplanes when they took off. The chaos alone resulted in more than seven deaths.

Other nations, including Malaysia, have begun evacuating or advising their citizens to leave the country.

Promising to maintain peace and diplomatic relations with the world, the Taliban said that no harm would come to civilians as they transition into power.

A spokesperson for the Taliban appeared on an unprecedented local news broadcast while being interviewed by a female presenter where it was said that they would forgive those who stood against them and honour the rights of women.

But critics still remain sceptical of the Taliban’s intentions and what’s in store for the future of Afghanistan.

The current situation in the country is also considered relatively calm despite Taliban forces patrolling many of the countries cities.

Citizens are said to be going about their lives as normal with businesses remaining open and people moving about freely.

However, there are reports that civilian protests have erupted in some parts of the country as well as rumours that the Taliban were arresting people.

A participant tells me the Taliban shot at them but no exact info on casualties. Taliban have not said anything as well.
—
Taliban have returned to a changed #Afghanistan. pic.twitter.com/iZQ7B7KKJc

These brave women took to the streets in Kabul to protest against Taliban. They simplify asking for their rights, the right to work, the right for education and the right to political participation.The right to live in a safe society. I hope more women and men join them. pic.twitter.com/pK7OnF2wm2