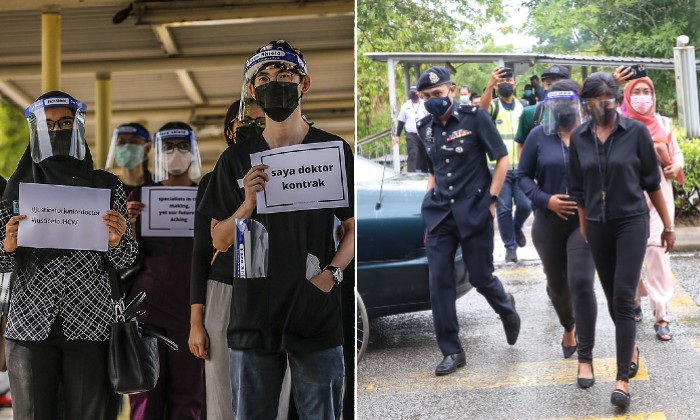 Doctors stationed at the Covid-19 Quarantine and Low-Risk Treatment Centre (PKRC) at the Malaysia Agro Exposition Park (MAEPS) in Selangor were reportedly held and questioned by police (PDRM) for participating in the recent #HartalDoktorKontrak protest.

Read More: Malaysian Doctors Protest Despite Being Warned Not To

In a statement released online, Asheeq Ali Sethi Alivi, a lawyer representing the group, revealed that PDRM had taken four hours to interrogate 12 doctors late during the “wee hours” from 11.45 pm Tuesday (27 July) till 3.50 am the following morning while doctors were on-duty.

According to the lawyer, a police report was filed by MAEPS PKRC Director Dr Shahabuddin Ibrahim, claiming that media presence during protests on Monday was not authorised by higher-ups.

Asheeq was also informed that investigations would be continued on Wednesday with PDRM wanting to take statements from those who were absent during last night’s operation.

The lawyer sees the matter as an act of “serious intimidation” performed by the Health Ministry (KKM) and PDRM.

On Tuesday, Health Minister Datuk Seri Dr Adham Baba had promised in Parliament that no disciplinary action will be taken against contract doctors who took part in the hartal and explained that it was their right to do so.

The matter was again brought up by Lembah Pantai Member of Parliament (MP) Fahmi Fadzil on Wednesday’s session of the Dewan Rakyat – questioning the Health Minister regarding the interrogation at MAEPS.

Similar concerns were brought up by Kuala Selangor MP Datuk Seri Dr Dzulkefly Ahmad on social media, hoping that Prime Minister Muhyiddin Yassin’s Cabinet of Ministers would perform according to their promises.

Plsss..the trust-deficit of the PN Govt is already at its lowest ebb, if there’s any left. https://t.co/tut8iF6Epx

Doctors at MAEPS were noted to have cancelled their plans to take part in the nationwide hartal on Monday.

According to the #HartalDocktorKontrak organisers on social media, there were apparently threats of police arrests made against the planned protest.

He stated that the probe was to commence under the Prevention and Control of Infectious Diseases (Measures within Infected Local Areas) (National Recovery Plan) Regulations 2021.

Yes, we will open an investigation paper since no person is allowed to gather or be involved in any gathering at any premises within any infected local area whether for religious, wedding, sports, recreational, social or cultural purposes without obtaining prior permission from the Director-General of Health as stipulated under the regulation.

Read More: Why Are Malaysian Doctors Planning To Go On Strike?