Malaysians start an initiative to help their neighbours who are in dire straits. 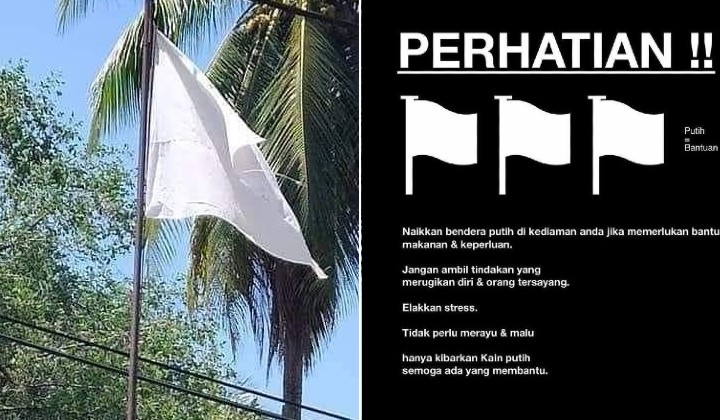 White flags are flooding social media as a movement is brewing right now with the mission to help Malaysians who are in need of assistance.

Symbolised as a call for help for those who wish to receive assistance can hoist a white flag, indicating to those living around the area that the household is in need of aid.

It has gained traction amongst netizens as at the time of writing, it is one of the top trending topics on Twitter with more than 10,000 tweets so far.

Malaysians being pressured more than ever before

Ever since the pandemic began, the livelihood of a lot of Malaysians were devastated as many were laid off with the government imposing limitations on businesses in an effort to contain infections.

It has not only affected the pockets, but also the psyche of Malaysians as well as it’s reported that 266 people took their lives between 18 March and 30 October of last year.

Politicians divided over the initiative

After the movement went viral, politicians were quick to jump on the bandwagon with Housing and Local Government Minister Datuk Zuraida Kamaruddin showing her support on social media.

However, Malaysians were not too happy with the tweet as they view that Zuraida was trying to make the issue political and criticised the Minister for not doing her job.

Others, were less sympathetic to the cause such as Selangor PAS Secretariat Roslan Shahir Mohd Shahir who said shared his thoughts on Facebook.

In the post, he said that the movement is a campaign engineered by Pakatan Harapan (PH) and added that those who want help can do so by visiting relevant agencies.

Go and meet the respective block heads or village heads, zakat centers, imams, chairmen and mosque and surau committees. The people’s representative service offices are also open apart from the offices of political parties that work for the people every day and do not give up just supplying white flags.

Meanwhile, Bachok MP Nik Abduh Nik Aziz had a different view on the matter, saying that Malaysians should seek help from God instead of humans.

Raise your hands in prayer to Him. That is the flag of strength and optimism in the test of life. Don’t lift defeat to the test by teaching the people to raise the white flag.