Here’s a spoiler: It appears to be mostly anti-vaxxers and “experts” of dubious character and history. 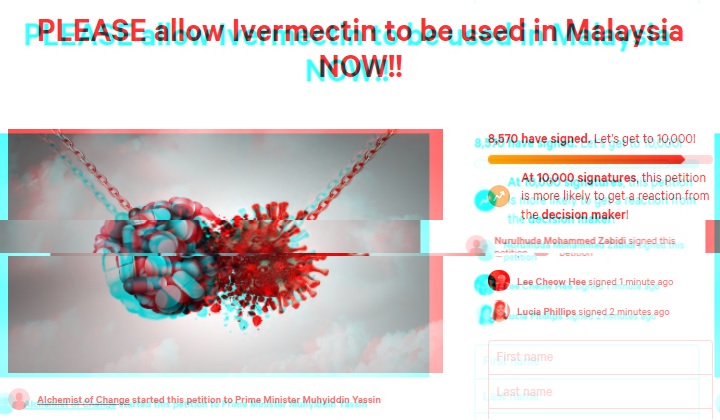 A petition, promoting the use of Ivermectin in Malaysia as a treatment for Covid-19 has garnered over 8,000 signatures as well as the support of Sungai Buloh MP Sivarasa Rasiah, who shared a link to it on his Twitter.

PLEASE allow Ivermectin to be used in Malaysia NOW!!. Do you agree?https://t.co/4evE8GjBjZ

TRP has reached out to the MP for comment but have yet to receive a reply.

However, a quick search through the links listed in the petition as proof why Ivermectin should be used shows an alarming pattern: They’re mostly U.S. right-wing anti-vax websites.

The first website, America’s Frontline Doctors, lists Ivermectin as medication for Covid-19, right after hydroxychloroquine which was previously promoted as a “miracle cure” by former U.S. President Donald J. Trump.

It also provides arguments for people to get around taking the Covid vaccines, and slams U.S. National Institute of Allergy and Infectious Diseases director Dr Anthony Fauci.

The second website, Front Line Covid-19 Critical Care Alliance, appears to be a site to sell Ivermectin and claims that it is as effective as vaccines, a claim that most health experts say is premature.

The next website is the World Doctor’s Alliance, which appears to be 9 people, some of whom are not doctors, none of whom are experts on infectious diseases (though one is a dentist), including one Professor Dolores Cahill.

The first is Professor of medicine Dr Paul E. Marik, from the Eastern Virginia Medical School, who appears to pride himself on being a controversial figure.

Dr Marik has previously gained notoriety for promoting hydrocortisone, vitamin C, and thiamine as treatments of sepsis, though his claims have been questioned as independent research was unable to replicate his findings.

More recently, he submitted a paper promoting Ivermectin as a treatment for Covid-19 to the Frontiers in Pharmacology which was initially accepted and then rejected as it “contained unsubstantiated claims and violated the journal’s editorial policies”, according to an article in The Scientist.

The second expert listed is, again, University College Dublin School of Medicine’s Professor Dr Dolores Cahill who was reportedly asked to resign as chairperson of the Irish Freedom Party after she said children who wore face masks would have lower IQs, among other unsubstantiated claims, at an anti-lockdown rally.

Dr Cahill has also, as recently as November 2020, denied the existence of a pandemic and said it had the same death rate as influenza (it does not).

The petition also lists her as an advisor to the World Health Organisation (WHO) which could not be substantiated.

But why the pressure to use Ivermectin?

We’re not really sure why there’s such a rush to use Ivermectin.

The World Health Organisation, and bodies in other countries such as the U.S. Food, and Drug Administration and Malaysia’s Health Ministry (KKM) are still conducting clinical trials.

So far, KKM says that many Ivermectin studies had limitations including small sample size, non-controlled study designs, or that the drug was used as add-on treatment which had confounded the effect of Ivermectin if any.

“In January 2021, a placebo-controlled randomized trial involving 24 non-severe COVID-19 patients did not manage to show a reduction in the proportion of PCR positive patients at day 7 post Ivermectin 400 mcg/kg single oral dose treatment,” reads a statement from KKM published on May 16.

“The authors of the pilot study, published in EClinical Medicine (Lancet), opinionated that larger trials may be needed to understand the effects of Ivermectin.

“In March this year, the Journal of American Medical Association (JAMA) published a randomised-controlled trial involving 476 adults with mild COVID-19 disease given a 5-day course of Ivermectin.

“The results showed that there was no significant improvement in COVID-19 symptoms resolution time. Whilst Ivermectin may have some anti-viral and anti-inflammatory effects, the evidence remains inconclusive,” concluded the statement.

While Ivermectin is available here in Malaysia, it is currently not being used to treat humans, only animals.

READ MORE: Isn’t Ivermectin For Cats & Dogs? Why Is It Being Touted For Covid-19 Treatment?