Religious Minister said that each State Government will come out with their own SOP for Hari Raya Aidiladha. 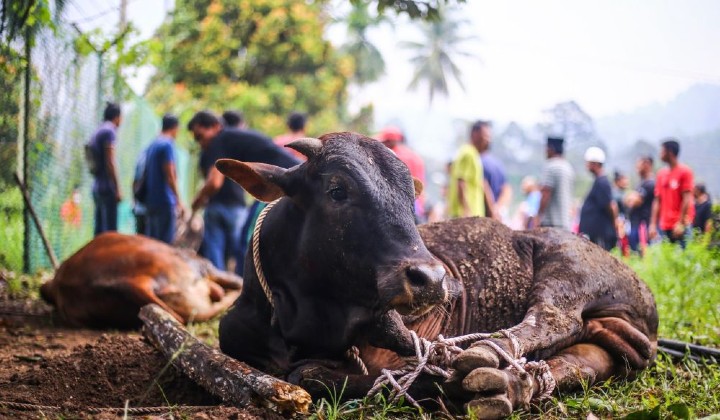 It appears that Muslims in Kuala Lumpur will again be celebrating Hari Raya Aidiladha in moderation.

The Federal Territories Islamic Religious Department (JAWI) issued an order for all ‘korban’ or animal sacrificial activities to be done away from local mosques and suraus.

JAWI’s statement on social media says that all sacrificial activities – from the slaughtering of sacrificial animals to the packaging of meats for distribution – must be done at official Department of Veterinary Services’s (DVS) slaughterhouses or private ones that have been approved by DVS and JAWI.

The meat from the korban must then be distributed directly to any participants, frontliners, targeted groups as well as the needy based on a prepared list.

JAWI will also be allowing korban activities to be conducted at open spaces outside of mosques or suraus with approval from Local Authorities (PBT), District Health Departments, DVS and JAWI.

Based on the standard operating procedure (SOP) detailed by JAWI, only five animals will be allowed for sacrifice in any given open space in a single day and only 12 people will be allowed to participate.

Each state, own SOP

The National Council for Islamic Religious Affairs (MKI) recently declared that each state will have the authority to determine its own Hari Raya Aidiladha and korban SOP.

Religious Minister Datuk Dr Zulkifli Mohamad Al-Bakri was quoted as saying that any decisions relating to SOPs will be made under the consideration of State Governments and their Islamic religious bodies.

The resolution of the MKI meeting will be communicated to the Conference of Rulers and brought to the State Authority for consideration and decision (will be made) at the respective state levels.

States such as Perlis have already come up with their korban SOPs which is similar to the ones released by JAWI in KL.

Health Director-General Tan Sri Dr Noor Hisham Abdullah noted that the Sivagangga cluster in Kedah and the Kurau cluster in Perak were spread through movement and travel during the festivities.

It still remains unclear if the Federal Government will allow Malaysians to travel, balik kampung or even visit each other during this year’s Hari Raya celebrations with the Full Movement Control Order (FMCO) scheduled to be in effect till 28 June.