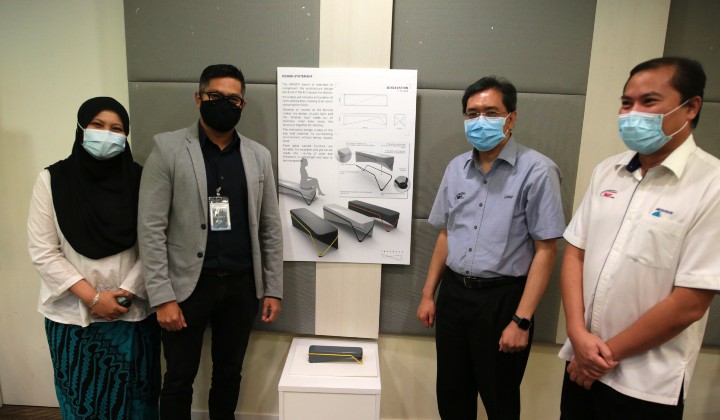 When husband and wife team Jaihar Jailani Ismail and Noor Syahidah Abdullah submitted their design to the TRANSEAT – MRT Putrajaya Line Underground Stations Bench Design Competition, never did they expect to be the grand prize winners to bring home RM10,000 in prize money.

But that’s exactly what happened!

The dynamic duo’s winning bench design, Infinity Bench, was created to complement the architectural design of the MRT Putrajaya Line stations. Freelance industrial designer Jaihar and academician Noor Syahidah also took into consideration the many functional aspects needed for a bench in an MRT station.

“The Infinity Bench is an inclusive social bench that promotes design, art and culture,” said Jaihar.

The end product is a simple grey bench with clean lines imbued with a splash of yellow, which gives this writer Star Trek vibes for some reason.

In deciding the winning design for the competition, it is important for it to be safe, sturdy and tough for heavy use at a busy MRT station. The designs proposed need to be able to have these key features.

TRANSEAT, which ran from 1 June 2020 till 30 July 2020, saw a total submission of 569 designs from 352 participants. The participants were made up of professionals, students and even general members of the public.

Besides taking home that sweet RM10,000 cash prize, Jaihar and Noor Syahidah’s bench will also be installed at 8 MRT Putrajaya Line underground stations for weary travellers to rest while waiting for their train.

Of course, the two are absolutely delighted by the win and expressed their gratitude to MRT Corp, MRM and PEREKA for the opportunity to put forward their design ideas and philosophy, through the creation of the Infinity Bench design.

Some of you eagle-eyed Malaysians may have already noticed the construction of this new MRT line but we wouldn’t blame you for being confused by all the dizzying construction going on around in Klang Valley.

The Putrajaya Line (previously known as Sungai Buloh-Serdang-Putrajaya Line) is the second line of the KVMRT Project to be developed.

Stretching from Kwasa Damansara to Putrajaya with 36 operational stations, it aims to serve a population of around 2 million people. So far, the plan is to have 27 elevated and 9 underground stations. A further 4 stations have been provided for the future.

There will be 10 interchange stations and connecting stations for commuters to transfer from the Putrajaya Line to existing and future rail lines including KL Monorail, KTM, KLIA Express, LRT Sri Petaling Line and LRT Kelana Jaya Line.

Based on the MRT website, construction of the section for Phase One operations from Kwasa Damansara to Kampung Batu will be completed in July 2021 and begin operations in August 2021.