Women’s rights groups says Malaysia should adopt a zero-tolerance policy when it comes to sexual abuse. 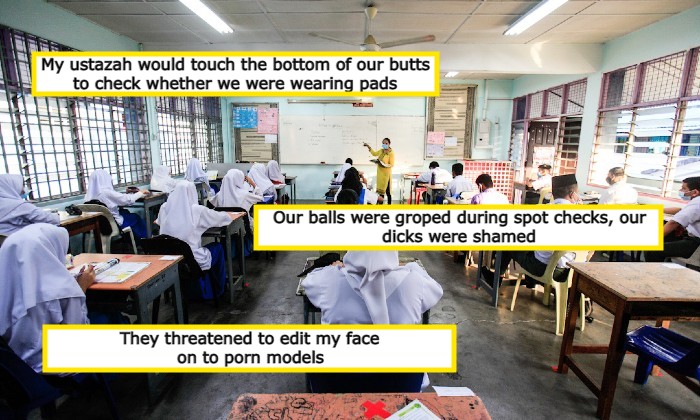 Malaysians are stepping up to address the concerning issue of sexual harassment, abuse and bullying happening in our schools and universities.

Writer and fashion model Nalisa Alia Amin became the common voice of reason when she went online to share anonymous confessions made by Malaysians who’ve either been a victim of or a witness to sexually latent behaviour and harassment perpetrated by teachers towards students under their care.

Her posting exposed the disturbing realities faced by unfortunate youths during their time in kindergarten, primary and secondary school as well as tertiary institutions – where both male and female students are subjected to; invasive body inspections, body shaming, molestation, verbal abuse, child grooming, and disciplinary punishments that borderline harassment and abuse.

The stories shared by Nalisa also revealed how Muslim educators were abusing their authority to religious police and harass students under the pretence of faith and discipline.

Among the confessions in her post included tales where girls were forced to show their menstrual blood to prove that they were on their period and were physically abused for not covering themselves up.

Other stories uncovered how teachers would inappropriately touch boys and girls during “spot checks” for illicit items and how some would also publicly shame students indiscriminately.

The brave confessions shed light not only on the alarming things that are happening to youths in Malaysia, but how going through these experiences can traumatise and weigh a person down later on in life.

Nalisa herself told of how she felt violated during her freshmen year at Universiti Teknologi MARA (UiTM) Melaka – where she, along with other female students, were made to prove that they were on their periods and could not attend communal prayer.

Speaking to TRP, she gasped at the number of horror stories people came out of the closet with to her personally.

“I’ve experienced it myself when I was in university. So I started posting screenshots of peoples stories on my Instagram just for awareness, and suddenly it snowballed from there,” she said and further disclosed that close to 100 confessions have thus far slid into her DM’s.

Nalisa believes that the government and authorities could definitely do more to address this illness that’s happening within our society.

“This is just not one story, these are numerous stories,” she said, glad that others were also coming forward with their own experiences of harassment and abuse on social media.

She concluded that a simple and easy system needs to be in place for survivors of harassment and abuse to safely come forward to be heard, protected and receive the justice they deserve.

“A title policy to protect students or at least a hotline for students to complain when teachers go out of hand. I feel like a lot of students have no power to complain, especially to the principal, discipline teacher,” said Nalisa, explaining that cases of abuse are often unresolved because schools and universities were protecting their faculty.

ZERO-tolerance for sexual harassment and abuse in schools

The All Women’s Action Society (AWAM), Sisters In Islam (SIS) and Pertubuhan Pembangunan Kendiri Wanita dan Gadis (WOMEN:girls) wants the government and the rakyat to take on a “zero-tolerance” policy on the worrying patterns of abuse, indecencies and harassment that plagues our youths.

In a joint statement, the women’s rights groups outlined how the issue reflects a systemic toxic culture of patriarchy, sexism, harassment, abuse, bullying and religious policing in Malaysia.

Putting forwards plans for a special task force to address the matter, they believe that the government and NGOs can work together to form robust systems in order to protect our youths.

The results of the task force should then be shared with the relevant authorities, including child rights and women’s rights NGOs, which can then be used as a basis for collaborations to form robust policies, including restorative remedies, that will be properly and vigorously enforced in these schools to promote zero tolerance towards harassment, abuse and sexual violations.

They also noted that parents play a crucial role not only to hold schools accountable for the enforcement of these zero-tolerance policies but also spread awareness and teach their children to be safe and respect gender equality.

If you or anyone you know may be a victim of sexual harassments and abuse, take that first step to reach out – the organizations below can provide some information, support and hopefully solace to those who need it;