It is an offence if you fail to give way to a government vehicle such as ambulances, bomba, police or customs department vehicles. 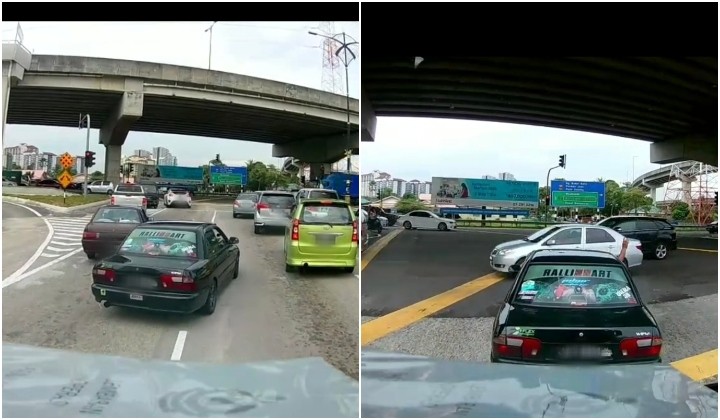 What can only be described as an a$$hole driver was caught on camera blocking the path of a fire truck in Johor Bahru during an emergency and “escorts” it to bypass other cars stuck in traffic.

The one-minute clip showed a fire truck with sirens blaring to alert the other cars to move out of the way at a traffic light. While all the other cars immediately moved aside to clear a path for the emergency vehicle, one particularly selfish driver decided to jump ahead of the fire truck and blazed through the gap.

Although the fire truck honked at the car to move out the way, it was ignored and the driver instead decided to “escort” it through traffic.

The driver even had the audacity switch on his hazard lights and even stuck his hand out of the window to wave at the other vehicles so he could run the red light.

However, the driver immediately ditched its “unofficial role” once he managed to jump ahead of the traffic queue and zoomed away.

The video was uploaded by TikTok by user @wawan0405 – who is also a firefighter – he pleaded for the public to do the right thing with a caption that said, “Please cooperate when you hear emergency sirens, and do not follow this driver’s example. Thank you.”

Here’s what to do when approached by an emergency vehicle

MOVE OUT OF THE WAY.

Every second counts when firefighters are called to an incident, as it is often to assist someone in a life threatening situation. The most common emergency vehicles are ambulance, fire and police vehicles.

So when an emergency vehicle approaches you while driving, do this:

You can actually lose your license if you don’t give way to an emergency vehicle.

According to the Road Transport Department (JPJ), it is an offence if you fail to give way to a government vehicle such as ambulances, bomba, police or customs department vehicles.

A RM300 compound will be issued for each offence, along with 8 demerit points. If you collect more than 20 demerit points within 5 years, your driving license will be revoked.

You also cannot break the law to give way to an emergency vehicle, like driving through a red light.