SUKE Highway denied that the driver was affiliated to them. 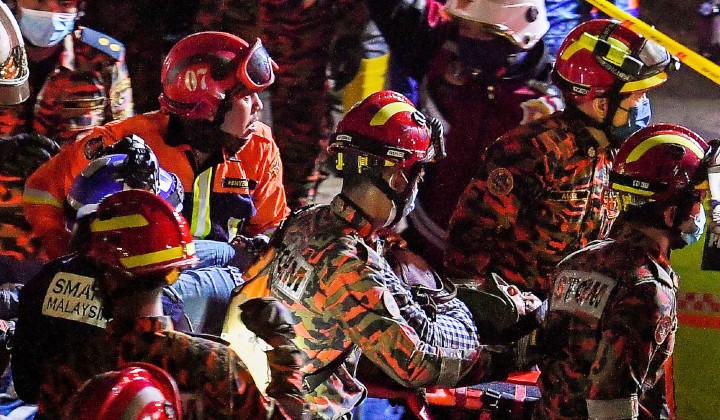 The trailer driver who was involved in the incident along the the Middle Ring Road Two (MRR2) near Desa Tun Razak, Cheras yesterday was detained for driving under the influence.

This was after traces of methamphetamine was found in the urine sample of the 40-year-old driver and he was arrested and will be remanded under Section 15(1) of the Dangerous Drugs Act.

The police are also investigating the case under under Section 44(1) of the Road Transport Act for driving under the influence, Malay Mail reported.

An accident occurred yesterday along the MRR2 highway which killed 2 people after an iron scaffolding and frame collapsed onto the congested road during rush hour.

Based on reports by MalaysiaKini, the occupants were trapped for a few hours in the incident, with the the driver and two other women managing to escape with injuries after being trapped for several hours.

The van driver, Muhd Fairus Mohd Yusof, 47, broke his left shoulder, damaged his lungs and suffered internal bleeding while the two other passengers, Zaitun Zainal, 54, injured her left leg, and Zakiyyah Yakop, 51, was injured in the left calf.

Police investigations pointed out the cause of the accident involved a trailer which was transporting an excavator which collided with a pedestrian bridge steel frame at the construction site at around 6 pm.

It’s reported by The Star that the Sungai Besi-Ulu Kelang Elevated Expressway (SUKE) developer denied affiliation with trailer driver and mentioned that he was driving a private vehicle.

The family of one of the victims are currently waiting for the results of the Covid-19 test before a post-mortem can be carried out, Utusan reported.

Maslinawati Abdullah, 43, Norhayati’s sister, said she was waiting for a call from the hospital to make a second identification.

She said the process might take a while and once the hospital has found that her sister is negative for Covid-19, then the autopsy process can be performed.