The government has said it does not plan to make the Covid-19 vaccines mandatory. 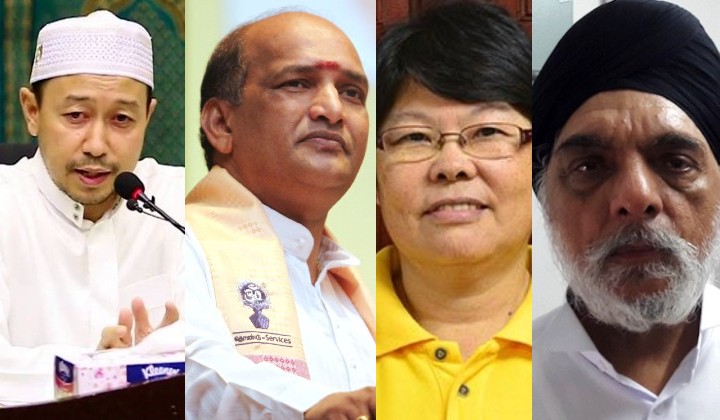 The leaders from several religions in Malaysia agree that being vaccinated is important in keeping people safe and preventing the spread of diseases and epidemics, such as Covid-19.

Speaking to Bernama, several religious leaders opined that taking a vaccine is good practice to ensure an individual’s well being and safety, as well as that of the community and country as a whole.

Previously, Prime Minister Tan Sri Muhyiddin Yassin has said that the government has no plan to make taking the Covid-19 vaccine mandatory.

Instead, it will only be administered to those who voluntarily agree to take it.

Muhyiddin also said the vaccine will be provided for free to all Malaysians, while foreign citizens will likely be charged a fee determined by the Health Ministry.

The government is still waiting for the Yang di-Pertuan Agong Al Sultan Abdullah Ri’ayatuddin Al-Mustafa Billah Shah and the Conference of Rulers to confer their fatwa (edict) on the use of the Covid-19 vaccines among Muslims in Malaysia.

Meanwhile, Federal Territory Mufti Dr Luqman Abdullah told Bernama that as Covid-19 is a pandemic that is endangering the lives of other Muslims, precautionary measures should be taken to prevent it from spreading.

The vaccination is ‘harus’ (in Islam), but it should be encouraged on the advice of the Ministry of Health that it is necessary to curb the spread of the COVID-19 pandemic.

The former lecturer in the Department of Fiqh and Usul at the Academy of Islamic Studies in Universiti Malaya said taking vaccines from non-halal sources for Muslims is allowed, depending on the situation and circumstances as long as it doesn’t deviate from Shariah law.

In Islam, the preservation of life is of utmost importance, as written in Surah Al-Ma’idah of the Quran, verse 5:32.

He continued saying that there is still a need to ascertain if the vaccines are sourced from halal ingredients and are certified by the Health Ministry and the Ministry of Science, Technology and Innovation (MOSTI) to avoid polemics.

As such, it is important that Muslim scientists around the world mobilise their efforts  to come up with a vaccine that is 100 percent from halal ingredients or sources, as well as to ensure that it has no side effects or negative effects.

He said that if the vaccination isn’t prioritised, there may be other diseases that arise which might bring similar problems as Covid-19 has, adding that a vaccine could prevent this.

Senior Minister (Religious Affairs) Datuk Seri Dr Zulkifli Mohamad Al-Bakri has said that the decision of the Special Muzakarah Committee Meeting on the vaccine had been presented to the Keeper of the Rulers’ Seal last week.

Also speaking to Bernama, the Malaysian Hindu Sangam (MHS) president Datuk R.S. Mohan Shan opined that a Covid-19 vaccine should be given to all to preserve the well being of the community, regardless of religion, race, or country.

Do not die in vain because of COVID-19. We need to prioritise health and vaccination is the best preventive measure.

He added that the vaccine is important in maintaining an individual’s health, adding that a good person is one who doesn’t create problems for others and is not selfish.

Meanwhile, president of the Buddhist Missionary Society Malaysia (BMSM) Sister Loh Pai Ling said that being vaccinated is in line with the practice of doing good as taught by Buddha, adding that Covid-19 vaccines could make the world a safe, healthy, and stable place.

We need to have pure and good intentions to make the country or world a safe place with a community that is healthy and free of COVID-19.

However, she added that those who refuse to be vaccinated must follow the stipulated standard operating procedures (SOP) set by the government.

It is also important for the community to take vaccines for personal safety and also for the good and safety of the community.

He said those who refuse to be vaccinated are exposing their own health and well being, as well as the safety of their family and community.

Meanwhile, in Vatican City, Pope Francis told the United Nations that the Covid-19 pandemic has highlighted the importance of promoting public health and ensuring everyone has access to vaccines.

He also said that the poor and weakest members of society should get preferential treatment when a Covid-19 vaccine is ready.

If anyone should be given preference, let it be the poorest, the most vulnerable, those who so often experience discrimination because they have neither power nor economic resources.

Pope Francis, head of the Catholic Church and sovereign of the Vatican City State via Reuters