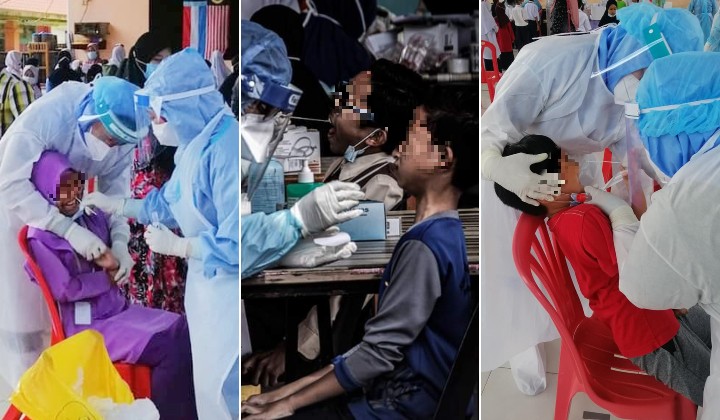 Emotions are running high as images of Malaysian schoolchildren getting tested for Covid-19 spreads online.

Kids, believed to be as young as 7-years-old, were seen attended by healthcare workers clad in personal protective gear, performing swab tests and other tasks.

Netizens were particularly distraught by the close-up images of several children clearly showing discomfort while having cotton swabs stuck up their noses.

Read more: Covid-19 Test Can Be Quite Uncomfortable, According To One Local Doctor

Covid-19 tests were also seen conducted on school teachers and several images also show the concerned faces of people believed to be the parents and guardians of the children, eagerly awaiting for the screening process to end.

It’s understood that SK Permatang Janggus had been ordered to close for eight days, beginning October 2, 2020, after a teacher who had recently travelled to Sabah was tested positive for coronavirus.

Reportedly, around 600 students from the school were screened and placed under home quarantine.

Meanwhile, it’s said that SK Silabukan along with 30 other schools in Lahad Datu had previously been closed down since September 23, following a rise in cases in Sabah.

As of writing, Malaysia had recorded a total of 11,484 Covid-19 cases with 1,334 patients still active and receiving treatment.