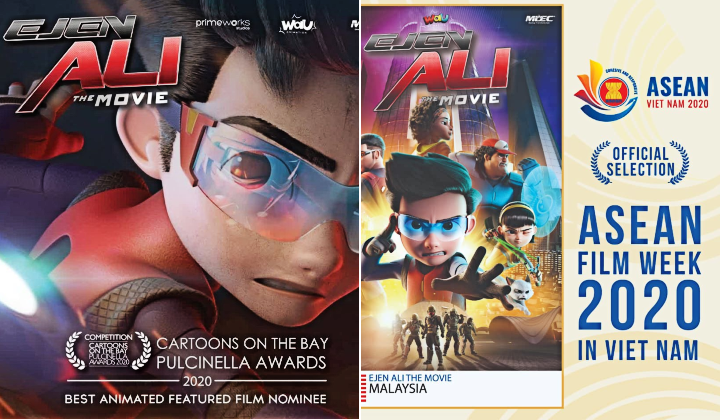 The movie adaptation of one of the country’s most popular children’s animated TV series is in the running for the Best Animated Feature Film Award at the 24th edition of Cartoons on the Bay Pulcinella Awards.

Taking place this December, the Pulcinella Awards is Italian international film festival honoring the best in film, TV and animation.

Ejen Ali The Movie would be competing against 16 other films and be featured among 350 other creative works from 20 different countries.

Not only that, but the movie would also be representing Malaysia at this year’s Asean Film Week 2020 in Vietnam.

The film will be screened for public viewing in Hanoi in celebration of the country’s 2020 Asean Chairmanship to commend the best of Southeast Asia’s creative minds.

Ejen Ali stands as one of Malaysia’s most beloved homegrown children’s cartoons. The original animated TV series centers around the story of a 12-year-old spy named Ali, who is thrust into the world of espionage after being recruited into the top-secret M.A.T.A or the Meta Advance Tactical Agency. Hence the adorable designation of Ejen (Agent) Ali.

The show features incredibly fluid animation, colorfully diverse characters, and is jam packed with action, adventure, and comedy for the whole family.

The movie adaptation which came out in 2019 had made regional waves when it collected over RM30 million in overall box office sales in Malaysia, Indonesia, Singapore and Brunei.

In fact, the show had even earned a trophy for Best Short Animated Film at the 28th Malaysian Film Festival (FFM28) in 2016.

The Ejen Ali animated universe is so popular with the kids that it has even garnered its own mobile video game, besides countless other marchandise.

Check out the trailer for Ejen Ali The Movie if you haven’t seen it yet.