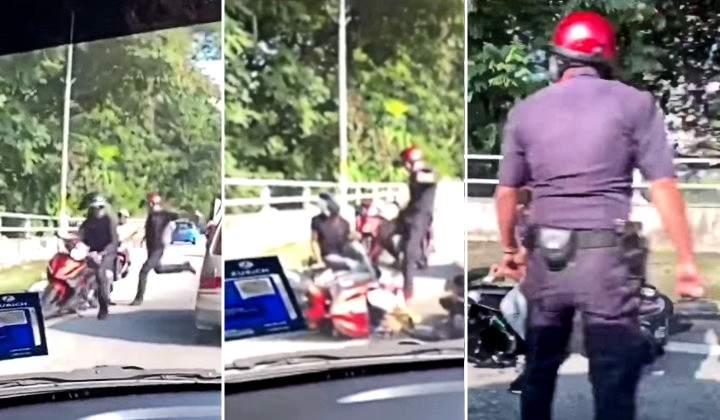 In the wake of the Black Lives Matter (BLM) protest against systemic racism and police brutality in the United States (US), the Royal Malaysian Police (PDRM) is investigating its own alleged case of excessive violence committed by their officers.

In a video that’s gone viral online, a uniformed police officer was caught kicking at an apparently unarmed suspect after the latter had crashed and fallen off of his motorcycle by the side of a road near Tasik Ampang Hilir, Kuala Lumpur (KL).

In the 10-second-ish video captured by a passerby, a police officer is seen cornering and repeatedly kicking a suspect, who at the time was already on the ground next to a fallen bike.

In the video, another officer is seen falling off of his own motorcycle before proceeding to try and calm his partner down.

Speaking to the press, KL Police Chief Datuk Seri Mazlan Lazim said that the incident would not be taken lightly and strict action will be taken against any officers who violate standard operating procedures (SOP) while on duty.

Revealing details behind the video, the Chief explained that the officers seen in the clip had tried to stop two suspicious individuals on a motorcycle before the suspects raced off in efforts to avoid capture.

The Chief said that the suspects who were riding on the opposite side of traffic suddenly lost control of the vehicle and crashed at the side of the road.

According to Mazlan Lazim, during the incident, the suspect had responded aggressively and resisted arrest.

Reportedly, only one of the suspects managed to be detained by the officers while the other, who was riding pillion, managed to escape by jumping into a large storm drain at the scene.

Preliminary tests confirmed that the apprehended suspect was positive for drugs and also had a prior criminal record of drug use and burglary.

The Chief said that the case was currently being investigated under the Dangerous Drugs Act 1952 and an internal investigation is being conducted to probe the officers in question.