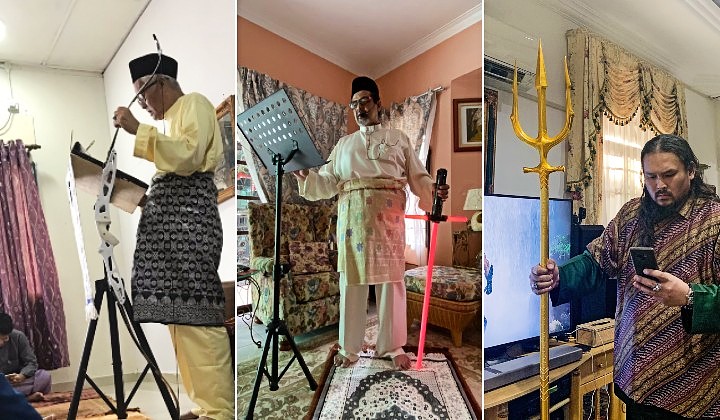 Last weekend saw millions of Muslims around the globe rejoicing in the humble celebration of Hari Raya Aidilfitri, but with many countries, including our own, still confined under Covid-19 restrictions, the ‘new normal’ Hari Raya hits a bit different this year.

Normally on Aidilfitri, Muslims would congregate at mosques in the morning to perform the customary Aidilfitri prayers in communion.

But for the first time in recent memory, many Malaysian Muslims took the opportunity to perform their “Cov-Eid” prayers at home with their families and shared charming scenes of them making do with what they have to perform the obligatory khutbah or religious sermons following the morning prayer session.

Please share pics of your home khutbahs. I wana see all the tongkats 😂 pic.twitter.com/cyNaW4W3dz

my father during khutbah this morning

btw the text was on the computer hahaha pic.twitter.com/6BNTh96FqL

Just delivered the most fire khutbah! I hear shaitan’s back I’m ready for him ⚔️ 😤 pic.twitter.com/ouE5kd9133

my dad delivered the khutbah raya with a golf club as his tongkat 😭😭 pic.twitter.com/dgZV74cS9Q

However, there are those who feel that the act of using such random objects during a religious activity to be un-Islamic and detrimental to the religion.

All of these "funny" photos of people holding different tongkat, penyapu, joran and so on for Aidil Fitri khutbah,

Khutbah is supposed to be an ibadah which focusing on reminding people of Allah, not something to laugh.

The matter even drew a response from Malaysia’s Religious Affairs Minister Datuk Seri Dr. Zulkifli Mohamad Al-Bakria who, though not condemning such actions directly, mentioned that such a religious activity should be conducted with respect for Islam and not be made fun of.

According to the former Mufti, Muslims should make use of a ‘proper’ staff if they have it, instead of utilizing arbitrary objects such as broom handles, golf clubs, or lightsabers for that matter, while performing their religious duties.

However, the minister also mentioned that as long as a person has no intention of mocking the religion while performing such acts, then everything should relatively be okay.

The sermon is good enough; however, if possible, be serious about the object in hand while reading the sermon and don’t make a joke out of it. Hold a stick if you want to,  though it is optional to hold something while giving a sermon.

Apart from the no balik kampung rule and constraints on open houses, Malaysian Muslims were also advised against going to the mosques to perform religious activities during Aidilfitri due to the ongoing Covid-19 pandemic.