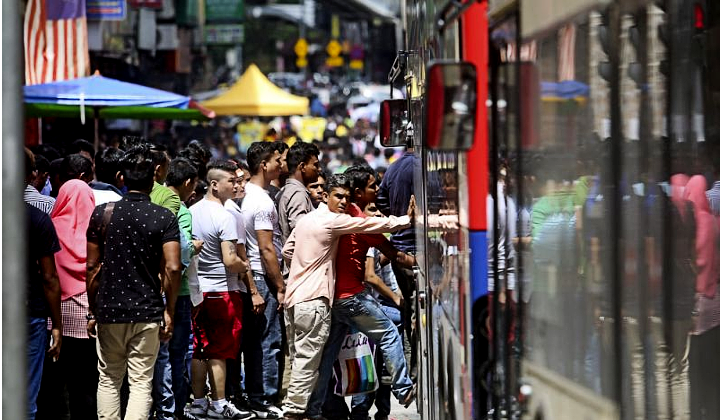 A number of construction workers have reportedly gone on the run after undergoing mandatory Covid-19 screenings in Kuala Lumpur.

According to FMT, 145 workers had fled quarantine at the Pavilion Embassy construction site in Jalan Ampang.

Previously, a targeted Enhanced Movement Control Order (EMCO) was placed on the site after more than 20 individuals were confirmed positive for Covid-19.

Some 400 workers, mostly foreigners, were locked down in the area and the Health Ministry is investigating the source of the latest â€œconstruction clusterâ€.

Fortunately, as of writing, 11 of the over 100 escaped workers have already been found and detained.

Authorities explained that the details of the escaped individuals are already on hand as the group had apparently run off after medical teams had taken their swab tests and recorded their identities.

The government had previously announced for all foreign and migrant workers employed in the country to be tested for Covid-19 before they’re allowed to work.

This new standard operating procedure (SOP) seems to already be in effect as employees were already spotted queuing up for Covid-19 screenings at a clinic in Klang Valley.

In a video making rounds on social media, a massive line of supposedly migrant and foreign workers is seen starting from a clinic and snaking for a long distance along a street in Glenmarie, Subang.

Dont blame them on the zero social distancing. This is a result of poor planning by all our menteri kanans @AzminAli @IsmailSabri60 pic.twitter.com/oUcyu4Zne4

According to the government, the cost of Covid-19 screenings should be covered by companies and employers as a means to not only keep their businesses going but also to curb the spread of the virus and protect public health.

Siblings Thrown Off From MRR2 Highway By Father, Three Dead In Murder-Suicide