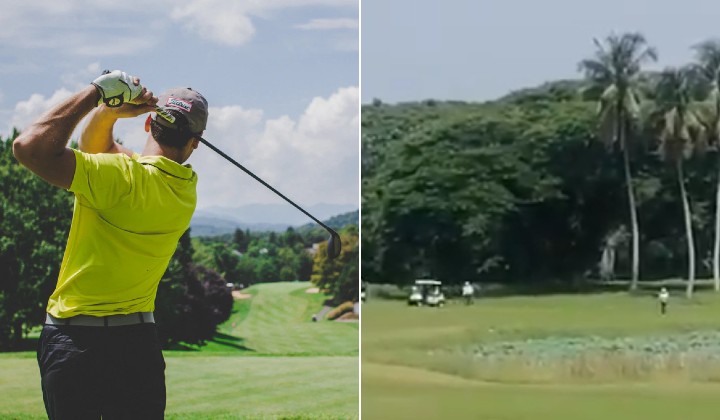 It seems like a global pandemic poses no handicap for three gentlemen from Ipoh who were caught playing golf at a Country Club in Batu Gajah during the nationwide Movement Control Order (MCO).

Police said the trio were spotted enjoying a day on the green at just before noon.

Amazingly, there was even recorded footage of the men, captured at a distance while they were busy with their game.

The 36-second clip displays a rather delightful scene, showing the men swinging away and riding around in their buggies on a bright sunny day, with birds chirping in the background.

According to police the trio had even tried to make a quick getaway from the cops in their buggies but failed to do so.

Though their identities were not released, police revealed the detained suspects to be the golf clubâ€™s manager aged 67, a 58-year-old transportation manager and a 36-year-old tuition teacher.

Moreover, an image obtained from the police and shared by Berita Harian showed that two of the suspects appeared to be foreigners.

Besides having all their golfing equipment confiscated, all three are now facing charges for violating the MCO under the Prevention and Control of Infectious Diseases Act which can land them a hefty fine or months of jail time, or both.