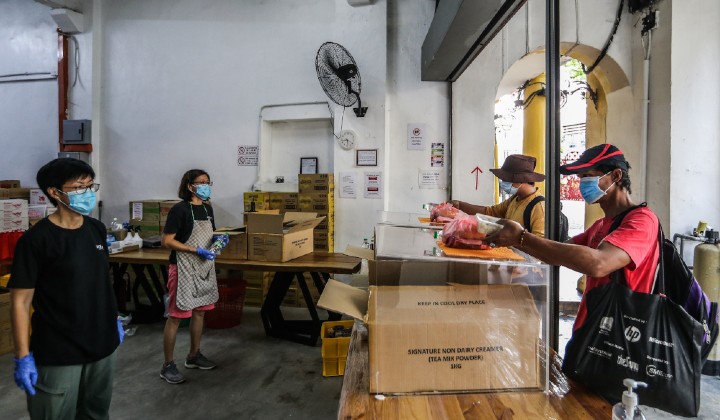 With the government banning non-governmental organizations (NGO) and charity groups from directly providing aid and donations to the needy, activists are left lost and disappointed.

Kembara Kitchen, a local charity group that has provided aid and supplies to the unprivileged since 2013, had to give away their stockpile of frozen foodstuff to their neighbors.

Some 100kgs of frozen udon, steamed buns and chicken fillets meant for the poor were simply donated to those who essentially did not need it to keep the perishables from going to waste.

The group said that they had some 7 or 8 tonnes of food left with no credible way of distributing it.

Following the Movement Control Order (MCO), a new ruling was set requiring NGOs to deliver food and aid to collection points managed by the Welfare Department. According to Putrajaya, these items would then be redistributed to where it’s needed by the countryâ€™s Rela or Civil Defence Force.

Kembara Kitchen along with other NGOs remained skeptical of the government’s abilities to properly distribute the acquired aid.

Critics are concerned over the governmentâ€™s overall logistical capabilities at redistributing the supplies as well as its general presence within the community.

Many groups have come out pleading to the government to reconsider its directive and allow NGOs to continue with their charity work.

Meanwhile, some organizations are choosing to be defiant of the governmentâ€™s rules as NGOs in Penang reportedly continue to give out food to the poor despite restrictions.

The Consumers Association of Penang (CAP) feels that organizations providing aid to the poor should be allowed to continue as long as no issues arise from them doing so.

Penang Deputy Chief Minister II Prof Dr P. Ramasamy had also come out with a statement on Facebook saying that the restriction set by the government was unnecessary as NGOs were doing an excellent job at providing help to the poor.

Source: NGO left with no choice but to give away 100kg of frozen food Should Charity Aid Groups Be Considered Frontliners And Be Exempt From MCO? NGOs tell why barring them from delivering food, aid is problematic
Tags
charity covid-19 donation movement control order (MCO) non-government organisations (NGO) restrictions