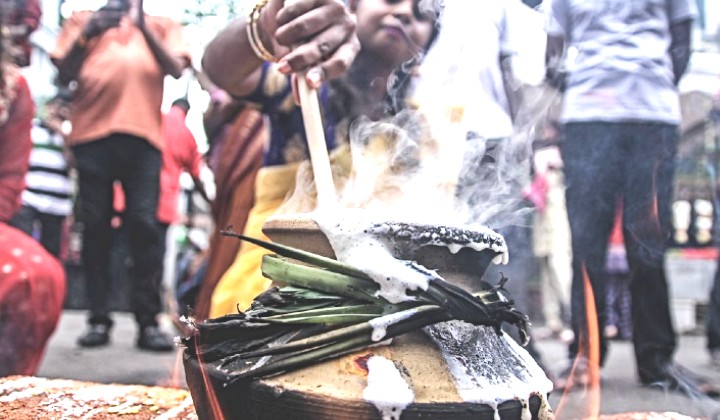 Among the joys of living in such a multicultural country as Malaysia has got to be our many festive seasons and celebrations.

However, it seems that every time a festival rolls in, some Malaysians would be a tad bit curious about whether it was okay for them to celebrate non-Muslim festivals.

This time, it’s Pongal’s turn to shine, and we at TRP think it would be neat to dig around for answers and shed some light into the discussion.

So what is Pongal?

Pongal or Thai Pongal is the traditional harvest festival celebrated by the Tamil community across the world, but primarily in South India.

It takes place on the 10th month of the Tamil calendar (that’s somewhere around mid-January) and is celebrated as a thanksgiving ceremony marking the end of the winter solstice as well as to commemorate a bountiful harvest season.

The festival gets its name from the customary ceremonial delicacy “Pongal”, a traditional rice dish specially prepared and served during the celebrations.

The festival takes place over a period of four-day, starting with Bhogi Pongal that happens a day before the actual celebration begins.

During Bhogi Pongal observers of the festival would take the time to clean and spruce up their homes with decorations to signify a fresh start for the coming years.

After that, the real festivities begin with the celebration of Surya Pongal, a day that, traditionally, is dedicated to the Hindu deity, Surya also referred to as the Sun God.

The dish is cooked in a clay pot over an open flame and is left to left to boil and spillover, signifying the overflowing joy and prosperity of the season.

The third day of celebrations is referred to as Mattu Pongal and it is a day dedicated to the heroes of the harvest, cows!

The fourth day of Pongal is also the final day of the celebration. Referred to as Kanni Ponggal, it is a day where family and friends would gather and pay their respects to each other during the auspicious season.

Is Pongal cultural or religious?

Though Pongal holds certain significance within the context of Hindu belief, in Malaysia the festival is interpreted and perceived as more of a cultural event rather than a religious one.

According to Malaysian Hindu Sangam president Datuk R.S. Mohan Shan as reported by The Malaysian Insight, there is nothing religious about celebrating Pongal.

Mohan went on to explain that the celebration of Pongal is recognised as a cultural celebration to officially mark the end of the harvest and celebrating it does not automatically make one a Hindu.

Is it okay for Muslims to celebrate Pongal?

In Islam, scholars have long agreed that it is indeed haram or forbidden for Muslims to take part in any non-Muslim religious festivals and celebrations.

However, just like how it is okay for Muslims to wish non-Muslims a “Merry Christmas” in December, it is permissible for Muslims to celebrate Pongal as long as they comply with the Islamic way of celebrating.

What are the rules?

According to the Federal Territory Mufti office, there are a number of restrictions that a Muslim must follow to celebrate a non-Muslim religious celebration;

This interpretation is also shared by the Department of Islamic Development Malaysia’s (JAKIM) panel of syariah experts.

JAKIM explains that Muslims are encouraged to extend congratulatory wishes to non-Muslims during their religious festivals and are strictly prohibited from undermining and insulting another’s beliefs.

In short, as long as the festival does not have any practices that go against the teachings of Islam then it’s A-OK for Muslims to take part in the joyous occasion.

Curious to know if you’re allowed to celebrate Chinese New Year, next? Check out our article, HERE, to get the deets!