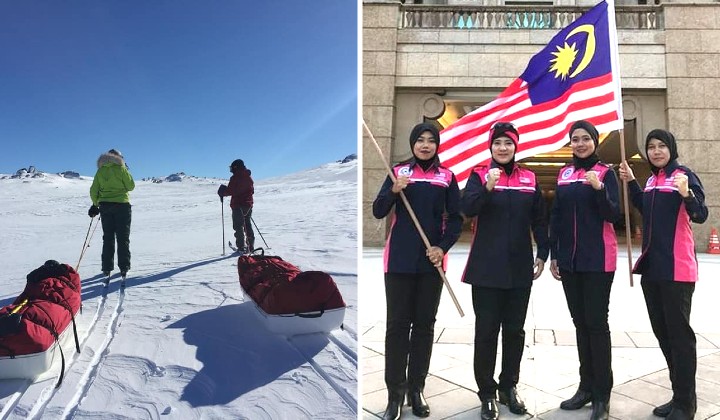 Malaysiaâ€™s first All Women Expedition to Antarctica (AWETA) has officially set foot on the frozen continent on Sunday (December 22).

Hand-picked by Dr Sharifah herself, the team had been training for the mission since 2017.

The expedition team is set on a month-long journey from December till January 2020 to explore the South pole and retrieve a time capsule which has been buried in the Antarctic snow for 14 years by Dr Sharifah during her first solo mission to the icy continent.

A legend in her own right, Dr Sharifah is credited as the first Asian woman to have ever journeyed to both the South and North pole.

The 54-year-old adventurer made her first solo trip to Antarctica in 2004, where she boldly ski-sailed for more than 1,000 km across the icy planes.

Then in 2007, the daring doctor made yet another record-breaking journey exploring the freezing Arctic North Pole on foot.

Antarctica is a land of extremes. Since it was first discovered in the 1800s, Antarcticaâ€™s vast territory has been primed for human exploration and globally recognised as an area for scientific research.

Known as the coldest place on the planet, temperatures on this icy continent can plummet to -97Â°C with chilling winds blowing across its frozen, desolated land at up to 200km/h.

The continent has piqued the interest of the scientific community over the past few years as the global Climate Crisis is currently melting the regionâ€™s ice at an unprecedented rate.