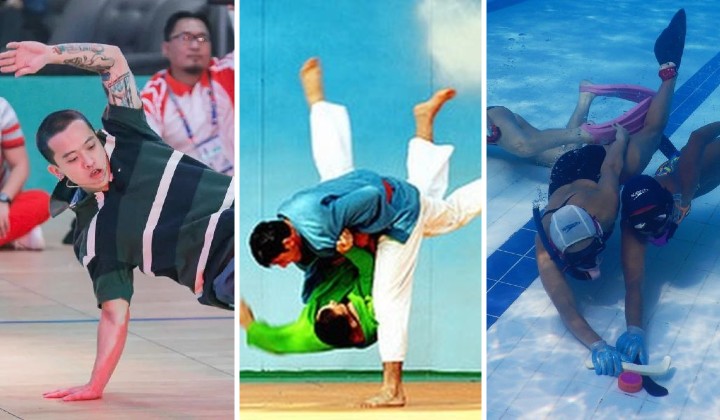 The biennial Southeast Asia (SEA) Games have commenced as nations in the region gather in the Philippines to compete and make their countries proud.

For the 30th edition of the SEA Games, a whopping 56 sports are contested.

Previously, the 2011 SEA Games in Indonesia which at 44 sports in total held the record.

Each host country is able to pick what sports they want to organise and the number of medals that are in a particular category.

This has resulted in some criticism that the event is a chance for the host countries to boost their odds at winning gold medals.

We looked at some of the events being held this year and found that a few sports are a bit… new to us.

First off, we want to congratulate Lego Sam Lee Jek who walked away with a gold medal – which is also Malaysia’s second at the games.

Although it might be a surprise for some as to how dancing could be classified as a sport, it actually made its debut in 23rd SEA Games in 2005, which was also the last time the Philippines were hosting.

Breakdancing is not the only category as there are Quickstep,
Slow Foxtrot, Tango, Viennese Waltz, Waltz, Five Dance, Rumba, Samba, Cha Cha Cha, Paso Doble, and Jive as well.

Kurash is a folk wrestling style that originated from Central Asia.

It’s a peculiar type of sport where wrestlers use towels to hold their opponents and throw them off their feet.

The sport first made its debut in the 2018 Asian Games in Indonesia.

While not many Malaysians are aware of the sport, one of our athletes, Fakhrul Adam Cruz won silver in the 90kg category at the 2019 SEA Games.

Imagine hockey, but underwater, complete with snorkels, flippers and a two-kilogram hockey puck.

It was invented by the British Navy to keep their divers in shape and improve their efficiency underwater.

Just like its land-based counterparts, players are required to hit the puck into the opponentâ€™s goal in order to score.

This would be the sport’s debut in 2019 SEA Games and four gold medals are up for grabs, the men’s and womenâ€™s six-on-six and four-on-four events.

Our country has a team in this competition, despite the sport being introduced here only 8 years ago.

Making its debut in this year’s SEA Games is a race where athletes will be relying on their technique, strength, and speed to overcome an endurance course.

There would only be 4 nations competing in the event, and Malaysia isn’t one of them.

However, although the sport is making its debut in the SEA Games, there was an obstacle swimming event held in the 1900 Summer Olympics in Paris.

At that time, twelve swimmers from five nations competed.

Also known as Eskrima or Kali, the sport originated from the Philippines and emphasizes on weapon-based fighting.

As you would expect, the Filipinos excel at this sport, snatching 4 gold medals in the men’s bantamweight, welterweight, lightweight, featherweight divisions on the first day of the 2019 SEA Games.

Parents should be less strict on their children playing video games as they might become a future SEA Games medalist.

This year, E-athletes will go for gold in games such as Dota 2, Starcraft 2, Mobile Legends: Bang Bang, Arena of Valor, Tekken 7, and Hearthstone.

Esports has become immensely popular, so much so that the Philippines think the SEA Games would reach a record number of global viewers by including competitive video gaming in the biennial meeting for the first time.

These are a few sports in the SEA Games which we find interesting but nevertheless, we are still proud of our nation’s athletes who are competing in some of them for the title of the best in the region.