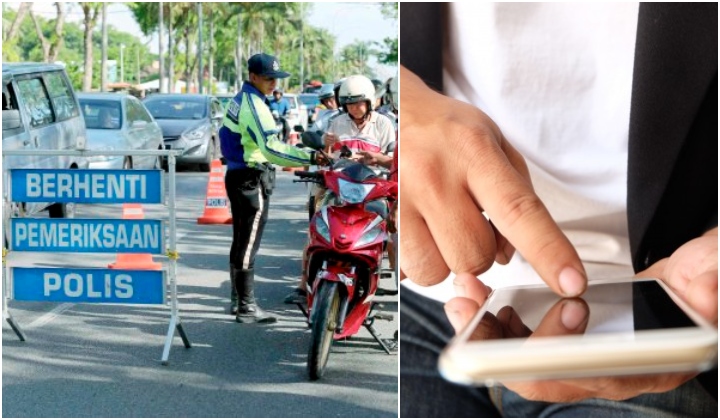 According to Deputy Home Minister Mohd Azis Jamman, the police can inspect the mobile phones of individuals that are being investigated to maintain public order in accordance with Section 233 of the Communications and Multimedia Act 1998.

So, is this true?

[Weâ€™ve tried our best to research, but weâ€™re not lawyers. So, if the cops stop you and you petik our names, kami tiada kaitan dengan kes ini.]

Based on Section 24 of the Police Act 1967, an officer has the right to stop and search someone (without arresting them) if the officer reasonably believes that the person is acting in a suspicious manner.

This basically means that the police can actually stop and search you and your belongings, such as your wallet, clothing, and also your mobile phone, even when youâ€™re just walking around in public, as long as they have a valid reason to do so.

However, according to the RED BOOK on the police and the rights of the public, this can only be done in the presence of an officer ranked Inspector and above.

Meanwhile, based on Section 116 of the Criminal Procedure Code, an officer can only search through someoneâ€™s personal belongings (such as a phone), when it is practical.

The keyword here is: reasonableÂ

Lawyer Foong Cheng Leong and ex-IGP Tan Sri Musa Hassan both told Free Malaysia Today that the police can only check a personâ€™s phone if the request is linked to an investigation.

For example, if you are being accused of punching someone, then your phone would not be relevant to the case and so they canâ€™t check it.

The RED BOOK recommends in their section on Body Searches Without an Arrest, that you should not allow the police officer to search you himself. Instead, you should volunteer to show him everything you have on you by taking them out one by one for him to see.

It also points out that refusal to cooperate with the police is an offence and could either result in the issuing of a warrant, or worse, being charged with obstruction of justice which carries a fine up to RM20,000 and/or imprisonment up to six months.

Is this justified though?

Well, letâ€™s see what the common practices are around the world, shall we?

Singapore and Australia have similar laws to Malaysia.

Singapore and Australian laws generally allow police officers to search your mobile phone (or technically your computer when it comes to Singapore, but same-same really) with your consent if they suspect it has information or has been used in a criminal offence.

If you refuse to provide the police with your phoneâ€™s passcode (or fingerprint or face), you may also be charged with obstruction of justice.

Canada and the U.S require an arrest or a warrant.

In Canada, the police can only check your phone after they arrest you, and only as long as the search is directly related to the circumstances of the arrest.

While in the US, the police can immediately check your phone if they have probable cause to believe that it contains incriminating evidence which is under immediate threat of destruction (read: you might delete it).

Otherwise, they will always need a warrant because privacy laws in the U.S. are pretty strict.

China police will straight up scan and download information off your phones.

In China, the police reportedly regularly use handheld devices to scan and download the contents of peopleâ€™s smartphones, such as contact lists, photos, videos, social media posts, and even emails.

According to Teng Biao, a U.S based legal scholar who spoke to Radio Free Asia, Chinese law is unclear about invasions into its citizensâ€™ privacy.

There are very few checks on state power and neither the police nor the government departments tend to pay any attention to the law anyway.

Suara Rakyat Malaysiaâ€™s executive director, Sevan Doraisamy called for a review of the Malaysian lawâ€™s provision, saying that phones should be treated similar to the right to remain silent when being questioned by authorities.

Our mobile phones often contain sensitive information such as emails, personal photographs, and even bank details. Therefore, in many ways, phones are more like a home than a handbag.

With all the information they contain and may reveal, maybe Sevan has nailed the hammer on the head with this one, eh?