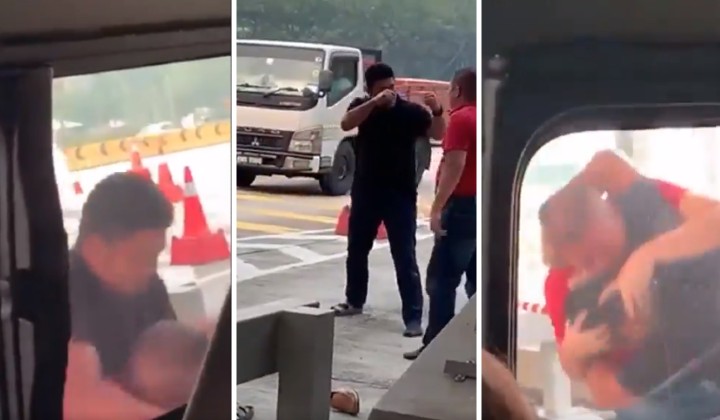 Two hotheaded uncles got into a street fight after an on-the-road discord.

In the incident, the two men, one driving a black Mazda CX5 and the other in a Hiace van, broke out into a fistfight at the Bukit Kiara toll plaza.

Apparently the 30-year-old van driver, who had his wife and daughter with him, got annoyed of being blocked and brake checked several times by the 38-year-old in the Mazda.

The episode was also recorded on video which went viral.

The 2-minute video (recorded from inside the van) shows the van closely behind the Mazda which kept changing lanes and blocking its path.

A baby girl can also be heard crying in the background.

The two men wrestled and shouted at one another for about a minute before the video cuts away.

It’s said that both men had made separate police reports regarding the incident.

Police said that the van driver had injuries to his knees while the man in red suffered injuries to the head, arm and leg.

The incident is currently being investigated under Section 160 of the Penal Code which is punishable by imprisonment of up to 6 months or a fine amounting to RM1,000 or both.

Police are asking anyone who witnessed the incident to step forward and aid in investigations by contacting the officer in charge, Asst Supt Ahmad Osman at 011-36508678 or Brickfields ops room at 03-22979222.

But we can tell you that without a doubt, BOTH men were definite LOSERS from the embarrassing incident…