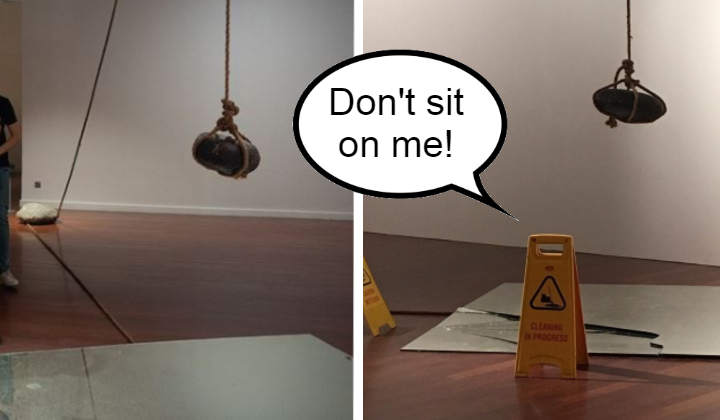 An artwork being displayed for Bakat Muda Sezaman at the National Art Gallery (Balai Seni Negara, BSN) has been destroyed.

Titled “Meetings I”, it is assembled as a large rock hanging over a large mirror, being stoutly held in mid-air by rope and another large rock.

Dasein Academy of Art student Mesita Jee was shocked and disappointed to learn that her artpiece had been irrevocably damaged when a visitor sat on it for a selfie.

This artwork at Balai Seni’s Bakat Muda Sezaman made me excited and anxious when I first saw it a few weeks ago. Wanted to go again tomorrow to see it and get the feel of it again. But my friend sent me this photo that the mirror broke. We really don’t deserve nice things kan pic.twitter.com/uUDIspRHmU

This is one of my favorite because of the way of installation have so many possibilities to expect BUT i never thought instead of the rock to cause the mirror to break, its human that did that. Have some trace of shoe print on the edge. At least thats what curator told. Sad 🙁

The National Art Gallery told TRP that Mesita’s artwork did have barricades put in place, but the public bypassed it.

The National Art Gallery clarified to TRP that there is a Gallery Manners guideline on appropriate behaviours, CCTV monitoring, as well as Museum Assistants in each gallery.

However, due to having almost 90,000 visitors that weekend at the Leonardo Opera Omnia exhibition, BSN states that they were unable to cope with the large number of visitors that were present.

BSN also urges that it is the responsibility of the individual to be respectful and courteous of the art exhibits and to not ruin them.

This is not the first time curious Malaysians have damaged artwork.

Most recently, Penang’s larger-than-life food replicas have been badly damaged at the Penang Arts Week earlier this year.

There is a severe lack of respect for arts and art literacy in the country. Things that looks pretty should stay that way, and you can definitely still take very nice pictures without touching the artwork.

BSN states that in an effort to improve the security of the art pieces, they will be holding educational sessions open to the public on August 30th, 2019.