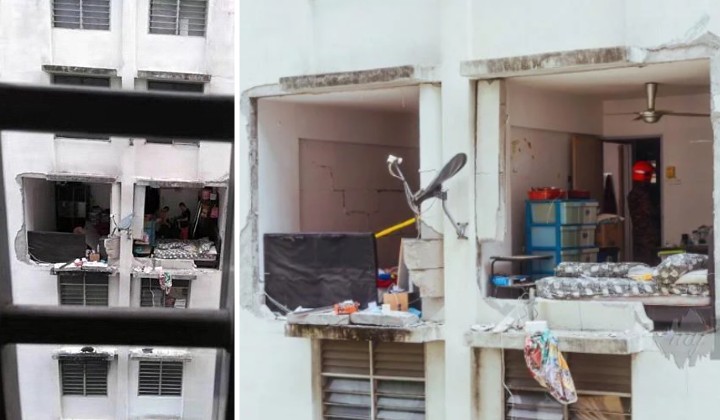 Yesterday (August 18), the neighbourhood of the Desa Green apartment in Penang was shocked by an explosion around 8am.

The explosion caused a 62-year-old man to suffer injuries to about 15% of his body.

He was rushed to the Penang Hospital and is in a stable condition.

They were sleeping in their bedroom when the blast occurred.

Neighbours reported having heard a loud explosion from within the apartment.

The blast not only blew off 2 walls of the victimâ€™s apartment but also caused cracks in their neighbourâ€™s walls and fragments to fall on nearby houses.

The senior citizen was reportedly lighting up a cigarette, that triggered the blow-up.

Although the cause of the explosion has still not been ascertained, the Timur Laut Police chief ACP Che Zaimani Che Awang suspects the blast could be caused by gas leaking from the hose of a gas cylinder.

Here are 2 ways to detect gas leaks from your gas tubing in your home:

Cover the entire tubing with the soap solution including the area where the rubber tubing and the propane tank inlet meets.

The easier and safe way would to buy yourself an electronic gas leak detector.

With this device, any abnormal concentration of propane gas (gas from gas cylinders), will trigger an alarm warning you of danger.