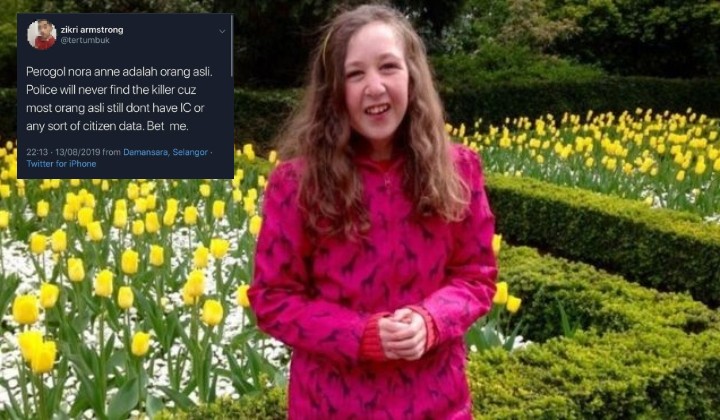 A man who posted a tweet claiming that 15-year-old Irish tourist, Nora Anne Quoirin had been raped and killed by Orang Asli was arrested by Police on Thursday (August 15).

The claim made by the account user identified by the name Zikri Armstrong via the Twitter handle @tertumbuk, recently went viral while the country was still in shock and saddened over the disappearance of the teenager.

Zikri Armstrong later issued a public apology for his troubling allegations which also made its rounds on social media.

According to police, the 29-year-old suspect was detained in Seremban and is currently being investigated.

The tweet sparked public outrage among Malaysians who were offended and disgusted over the unsupported claims made by the account.

It could take years to solve a case like this but still , your statement was irresponsible. Do you have any supporting evidence to back your allegations?.

the insensitive speculations will re-traumatise and re-victimise them. So, keep quiet. Donâ€™t spout any theories to them, including on social media. Donâ€™t hurt people with your own belief system. Because as a human being when we see someone feeling pain, we feel their pain too.

Before you say something bad to orang asli, better you stand front Mirror and think with smart brain! Do you ever see and watch about orang asli Rape! In news ??? Don’t judge like you know all about that! Wait for police confirmation!

The case is being classified under Section 233 of the Communication and Multimedia Act 1998 for making false and offensive statements on social media and Section 505 of the Penal Code for creating public distress.

Nora Anneâ€™s remains were found by Search and Rescue teams 10 days after her disappearance and autopsy results pointed out that the teenager had died due to starvation.