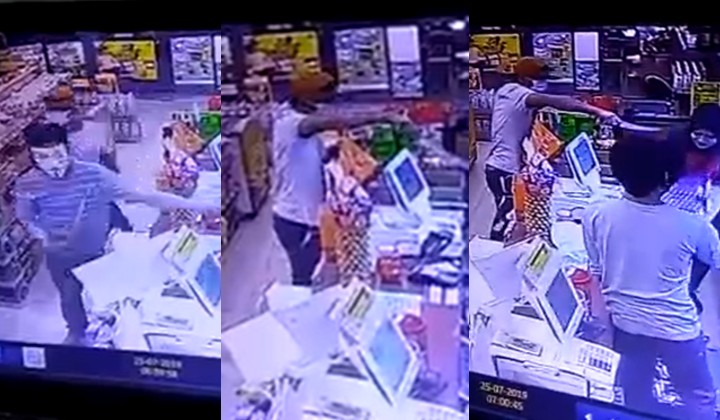 Two men made away with RM2,000 worth of cigarettes after robbing a 24-hour convenience store in Sungai Siput, Ipoh last week.

And conveniently enough, the armed robbery was captured on video and made its way on social media.

The 37-second recording of a CCTV footage showed two disguised robbers, one wearing what appears to be a Guy Fawkes mask, while the other hides his identity behind a surgical mask and an orange cap.

The tense scene shows the two suspects threatening the store cashier with machetes, making the distressed woman fill up a plastic bag with several boxes of cigarettes.

One of the criminals then moved behind the counter to fill up what appears to be a big blue plastic container (guess they brought it from homeâ€¦) with all the cigarettes that he could, before the two quickly walked out of the store as another customer can be seen casually stepping into the scene.

According to Police, the two suspects made their escape via motorcycle and believed to be aged between 20 and 30 years-old.

The case is currently being investigated under Section 395/397 of the Penal Code for armed and gang robbery.

Though viral videos such as these can be intimidating and sometimes quite desensitizing, social media has become one of the biggest tools in PDRMâ€™s arsenal against crime.

According to the nationâ€™s top cop, Datuk Seri Abdul Hamid Bador, the use of social media and the internet has aided in the cops solving some 30 crimes in a two month period alone.

The IGP also encourages the public and any crime witnesses to post and share genuine accounts of criminal cases and activity online, saying that such â€œcommunity policingâ€ efforts greatly benefit in enforcing the law.

So the next time you see some criminal funny business, donâ€™t be afraid to whip out those camera phones, because nothing beats good olâ€™ video and photographic evidence.