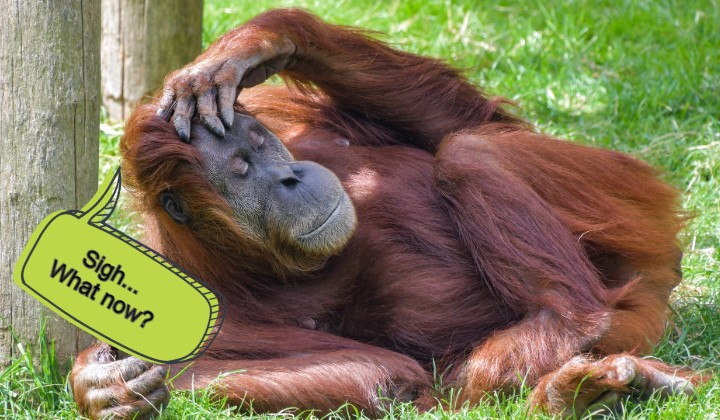 But itâ€™s not all bad newsâ€¦

According to the organization, while their numbers have declined in areas of forest patches within the stateâ€™s palm oil plantations, the overall population of the species has remained rather stable during the last 15 years.

Based on its latest extensive survey, the organization found that orangutan populations living near plantations have gone down by 30%, where at least 650 of them were lost between 2002 and 2017.

But WWF also notes that there were still some 11,000 of these majestic mammals still roaming the jungles of Sabah.

Orangutans are only found in the jungles of Borneo and Sumatera. (that’s Malaysia and Indonesia btw…) where three different species inhabit different parts of the forest, looking and behaving quite differently too…

There’s the Bornean orangutan, who likes to come down from the trees and move around on the ground.

Their cousins, the Sumatran orangutans tend to have longer facial hair.

And a more recently discovered species was found in Indonesia in 2017, where there are only some 800 of em’ around.

All of emâ€™ are endangered and threatened by habitat loss.

Malaysia is the worldâ€™s second-largest grower of palm oil following neighbouring Indonesia, with the product being our No.1 agricultural export.

And experts do agree that the palm oil industry has caused widespread deforestation across Southeast Asia.

So it seems like a solution is easy, right? If we want to keep these creatures around weâ€™d need to get rid of all the palm oil plantationsâ€¦

Well, technically itâ€™s not that simpleâ€¦

According to WWF scientists, themonoculture nature of oil palm plantations – monoculture means to plant only a single crop in a given area – is bad for the forest and its inhabitants, as palm trees don’t really provide the same environment that can support these creaturesâ€¦

But, coincidentally, the forest patches within the plantation landscapes allow for orangutans to travel between different areas. Acting as a sort of highway for them to get around the jungle and is attributed as a key factor in their survival in Sabah.

So, what will this mean for these shy-majestic creatures? Well, with a stable population, it will be easier for us to restore their numbers through conservation efforts.