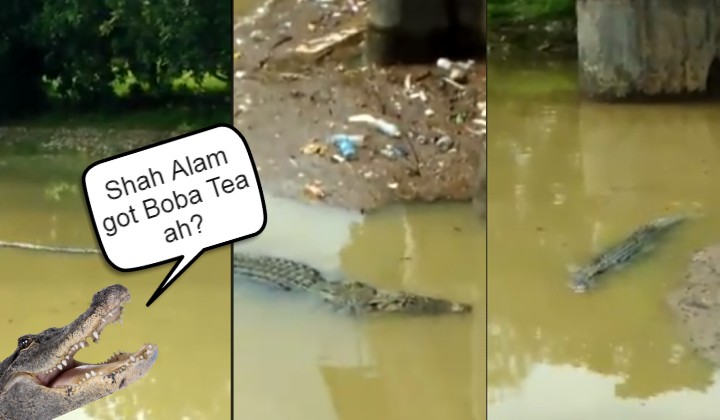 All those with herpetophobia â€“ an irrational fear of reptiles â€“ might want to stay clear of Shah Alam for a while, as a wild crocodile was spotted swimming near the flood gates of Sungai Renggam in Section 17 here yesterday.

In a video currently making its rounds on social media, the reptile can be seen treading its way across the waters surface with only the head and top-dorsal part of its body visible.

Selangorâ€™s Department of Wildlife and National Parks (Perhilitan) director Haidar Khan Mokbolhasan said that a report officially came in about the animalâ€™s sudden appearance through the departmentâ€™s hotline at 2pm.

Haidar Khan explained the water levels at Sungai Renggam had risen over the past days following heavy downpours and the river, which was one of the tributaries of Sungai Klang â€“ a well-known habitat of the carnivorous Saltwater Crocodile – Â was merely separated by a flood gate, making it not impossible for the animal to traverse the two waterways.

Since a department team was dispatched, there has been no further sightings of the animal, however Perhilitan will continue its monitoring of the area in case the croc decides to show up. (so guess he wants to play hide an go seek *laughs in buaya*).

In recent years there’s been a spike in wild crocodile sightings occurring near human populated areas.

In February, a juvenile croc, which was believed to have been a released by unknown individuals (who in their right minds would keep a man-eating reptile as a pet?) was spotted cosying around the Shah Alam Lake in Section 14.

In 2017 alone there were 33 reports of crocodile sightings very close to human developed areas and towns in Klang, Kota Kinabalu, and Penang.

Even an island off the coast of Sabah had been apparently overrun by these cool-blooded (pun intended) creatures.