Allegation was made that a school in Johor practised racism however the Education Ministry said this was not the case. 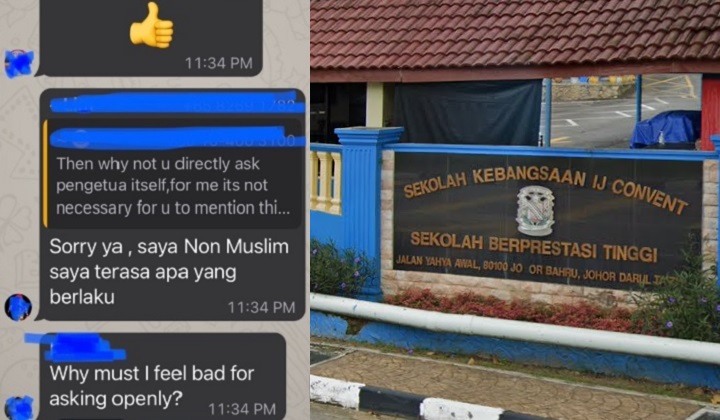 Social media lit up over the long Chinese New Year weekend over a workshop conducted by a school in Johor for its SPM underachievers.

A Twitter user by the name @sangria200 took to the social media platform on Sunday alleging that SMK Infant Jesus (IJ) Convent in Johor Bahru conducted an overnight exam preparation workshop for Muslim students at a hotel.

According to the Twitter user, the workshop was announced for ‘Agama-subject students’.

The user said the chat contents had disappeared however several parents allegedly took screenshots before that happened.

To sum it up, some of the non-Muslim parents were unhappy that the workshop was conducted for Muslim students only and voiced their displeasure in the group chat.

The school’s principal was alleged to have explained the matter in a message posted in the group.

The explanation was that the performance of Malay studens was worrying, and that based on the trial examination, 40 student would have failed their SPM if efforts were not made to help them.

An intervention was conducted in the form of a meeting with parents on 15 January. According to the principal, only 16 of the 40 parents involved had attended.

The workshop, according to the principal was the result of donation from parents and individuals.

The principal explained that they had never consciously ignored or discriminated the students. Denying that the workshop was a racist move, the principal said they did not want the poor performance of their Malay students to affect the school’s overall SPM performance.

The explanation however did not sit well with some parents.

The Twitter sharing went viral and subsequently the Ministry of Education (MoE) issued a statement.

Minister Fadhlina Sidek shared a statement in which the ministry said they had been made aware of the matter and obtained information from the Johor state education department.

What they found was that the workshop was part of a series, on the initiative of the Johor Bahru district education department (PPD).

The Johor Bahru PPD conducted a performance dialogue which was then followed up by a workshop organised by the school.

The workshop was a collaboration between the school’s PTA and the Parents Support Group, as well as parents, the community and the private sector.

“Initial report found that the workshop was among the efforts made by the relevant quarters to ensure all students, regardless of race are able to make preparations ahead of SPM.

“On 19 and 20 January 2023, the first SPM preparation workshop was conducted at Hotel Suasana in Johor Bahru involving 30 SPM candidates who had failed their Bahasa Melayu and History subjects as well as those who failed to pass several other subjects.

“The workshop was separated by series to avoid disturbing students who were preparing for Chinese New Year,” the ministry said.

It added that they were informed a second workshop would be conducted on 26 and 27 January at the same hotel.

“Investigation found that there was no discrimination against SPM candidates as alleged.

“However, the level of good communication will be increased to avoid from a repeat of this incident,” it said.