The woman was walking along Lorong Selamat, Penang, when the snatch thief quickly grabbed her handbag and rode away. 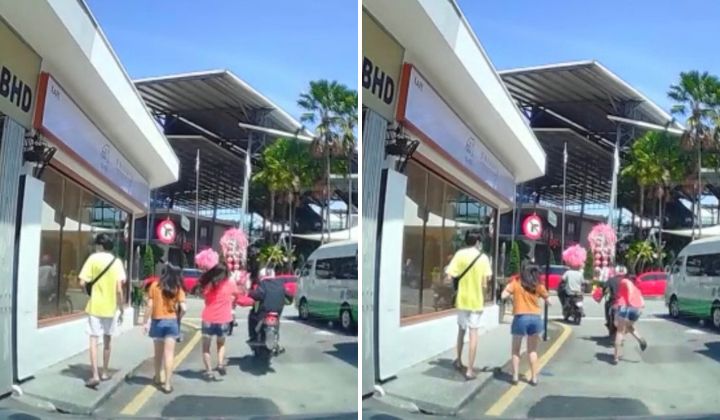 In the viral dashcam video, the woman could be seen walking along the busy road with a man and a young girl with her handbag slung over her right shoulder.

Not long after, the snatch thief rode behind her on a motorcycle and quickly grabbed her handbag before speeding away.

The three of them could only look on as the snatch thief got away.

Netizens were angered by the incident and hoped the snatch thief will meet due justice.

However, the victim is also criticised for walking in the middle of a busy road meant for vehicles. A netizen said the victim was lucky not to get run down by any vehicles during the incident.

While it’s not a foolproof plan, it might be safer for women to have their handbags facing away from the road and traffic.

Having the handbag slung over another shoulder and away from the road might make it harder for a snatch thief to grab the item.

Suspect has been apprehended

According to the police in a statement, the incident happened at Lorong Selamat on Thursday (12 January).

The woman suffered injuries to her right hand and losses amounting to RM2,800.

The suspect, 37, will be remanded for five days until 18 January to help with investigations.

He tested positive for methamphetamine and has five prior criminal records.

He’s also unemployed and is believed to have been involved in several snatch theft cases in the state, including two cases this year.