The driver in Lahad Datu, Sabah, couldn’t avoid the elephant in time when it suddenly crossed the road. 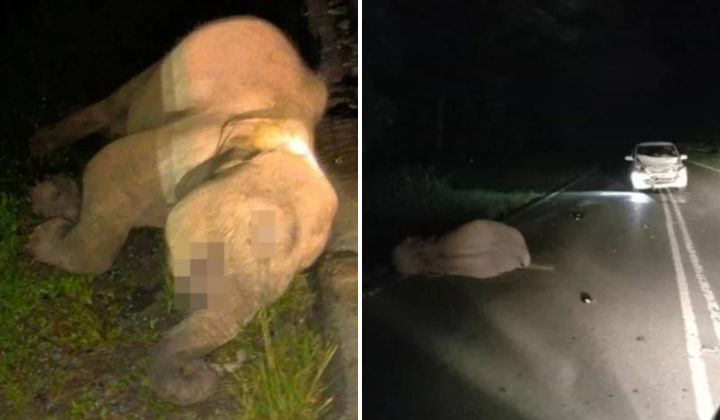 A baby elephant died after getting hit by an oncoming Perodua Viva along Kilometre 13, Jalan Lahad Datu-Sandakan in Sabah yesterday morning.

The Perodua Viva driver couldn’t avoid in time when the elephant suddenly crossed the road in the 2.16am incident. Sadly, the baby elephant died at the scene.

Due to the short distance, the driver couldn’t avoid and hit the baby elephant instead.

According to Berita Harian, the driver was unhurt but the front of the vehicle was damaged.

The elephant’s remains were sent for an autopsy and then buried.

Part of living with nature is to watch out for both their safety and ours.

Since it’s impossible to avoid nature and wildlife entirely, here are some helpful tips from thelanddownunder.com.au to drive safely in areas with wildlife roaming.

It’s safer to drive slowly, especially in poorly lit areas, so it gives you a better chance to avoid running over any wildlife animals.

Use the high beam

The high beam is helpful when you’re driving in poor visibility conditions. It helps light both sides of the road and further down the road.

However, the high beam can catch animals in a daze and they may not budge from the road. To get them to move, lower the lights (don’t flash them), slow down your vehicle and use the car horn.

Remember that animals don’t respond the same way to danger as people, so they’ll need time to move off the road. It’s important to stay calm.