The water tank on the roof of Apartment Penaga Mas burst and water rained on the cars parked below. 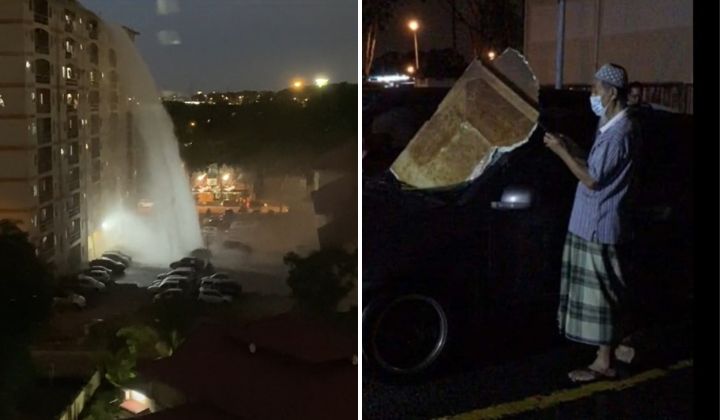 Recently, a viral Tiktok video posted by Ameiraaa showed a huge gush of water falling from the roof of an apartment block like a waterfall onto the cars below.

The strong force of the water damaged some of the cars parked below and even triggered vehicle alarms.

Residents could only wait and check the condition of their vehicles after the water stopped gushing from the roof.

According to Utusan, the incident happened at Block A of Apartment Penaga Mas in Taman Mas, Puchong, around 7.15pm on 27 October.

In some of the pictures shown in another Tiktok video, a huge piece of debris believed to be a part of the water tank went through one of the car windows.

The unfortunate incident heavily damaged six cars. Thankfully, there were no casualties reported.

Air Selangor has also sent a water tank to meet the needs of around 172 apartment residents for the time being.

The police advised residents with damaged cars in the incident to lodge a police report at Putra Perdana police station so they could claim vehicle insurance.