The parents were allegedly at home when it happened but were unaware their children were playing on the window ledge. 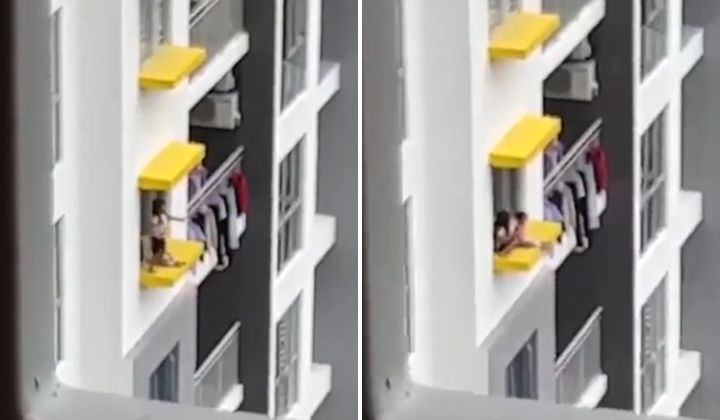 Children love to explore and sometimes their curiosity places them in dangerous situations.

A recent viral video showed two children, believed to be siblings, playing on the outside window ledge of their home in a high-rise condominium.

While the older girl stood on the ledge and made a small jump, the younger child next to her made small movements.

There were no visible grills to stop the children from falling if they made a misstep.

Seeing both of them on the ledge was enough to scare their neighbours who screamed from their own unit, trying to get them to not make any sudden movements while they attempted to get help.

Parents have given their statements

During the incident, both parents were at home but weren’t aware their children were playing right on the window ledge.

The parents have given their statement to the police and were allowed to return home last night.

In order to prevent similar incidents, the police advised all parents to keep an eye on their young children and not leave them on their own.

The case is being investigated under Section 31 (1)(a) of the Children’s Act 2001. Upon conviction, it carries a fine of not more than RM20,000 or imprisonment of not more than 10 years, or both.

Netizens said watching the video was uncomfortable because they were worried something bad could happen to the children.

They were especially worried about the child who made some small jumps on the ledge.

A few of them suggested parents install grilles on the windows as a safety measure at home to prevent unforeseen circumstances.