After a five-hour search, the police managed to arrest the suspect in Pontian for littering in the river. 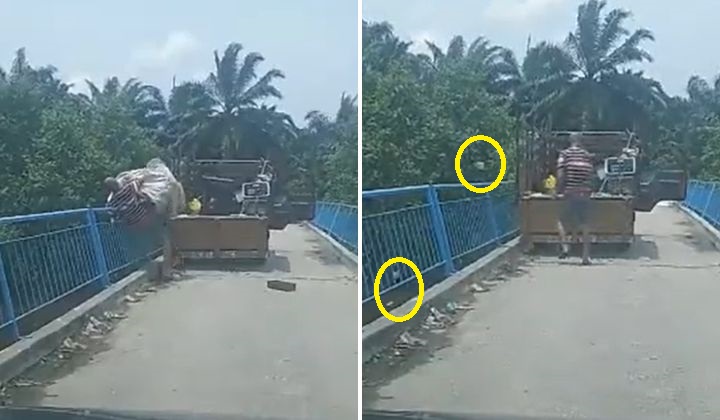 Everyone is taught in school not to litter our surroundings because it can lead to pollution and damage our environment. This includes no littering in the drains, rivers and the sea.

Recently, a video that went viral caught a man throwing litter into a river in Johor. It’s believed that he was tasked to collect and discard the rubbish through proper channels.

Initially, the police failed to find him at his residence. They managed to track down and arrest the 52-year-old suspect in Pontian around 7pm on 29 September after searching for him for five hours.

The suspect was then brought to Pontian police station to help with the investigation. He tested negative for drugs in a urine test and he has previous drug and criminal records.

He was hired to collect and dispose of the collected rubbish at a designated area but chose to do it in an easy way.

The suspect was released on police bail after having his statement taken. He faces a compound following Rule 52 LN 166/59 for littering from a vehicle in addition to driving without a GDL license.

The act of littering from a vehicle is a punishable act with a fine or compound up to a maximum of RM2,000.

The lorry driven by the suspect has been sent to Puspakom for further examination.

Kamarul Zaman added that the police are working with Solid Waste and Public Cleansing Management Corporation (SWCorp) to determine the next course of action based on their regulations.

According to Berita Harian, SWCorp has determined to impose a compound up to a maximum of RM10,000.

The police have also advised the suspect to stop littering and he has promised not to repeat his littering act again.

E-Hailing Driver Charged With Murdering 4YO Boy In Johor