The longest serving MIC president – dubbed the father of the Indian community by Prime Minister Ismail Sabri – passed away in his sleep earlier this morning. 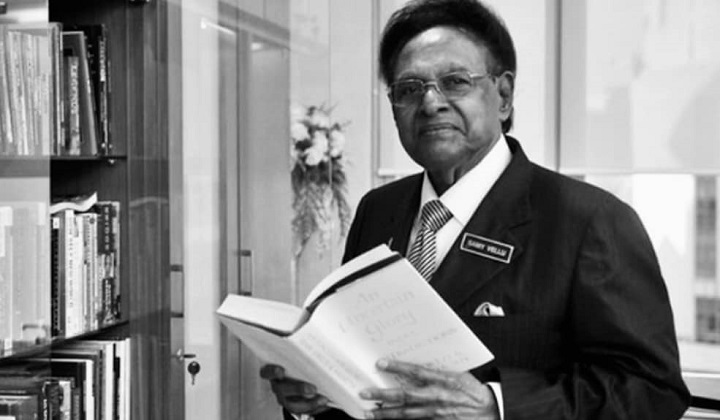 Former MIC president Tun S. Samy Vellu passed away in his sleep at the age of 86 today.

He was synonymous with the Sungai Siput constituency as he had served as its MP from 1974 to 2008.

During this time, he was also part of the Cabinet under three different prime ministers – Tun Hussein Onn, Tun Dr Mahathir Mohamad and Tun Abdullah Ahmad Badawi – between 1978 and 2008.

No details have been revealed yet on the reason for his passing but the wake was held at his residence at No. 19, Lengkongan Vethavanam, Batu 3 1/2, Jalan Ipoh, 51100 Kuala Lumpur at 2 pm.

It is expected that his remains will be cremated at the DBKL Crematorium, Cheras at 4pm, tomorrow.

Following his passing, friends and foes paid tribute to the longest-serving MIC president in the Indian-based political party’s history.

A mentor, a good friend, a great fighter

Prime Minister Datuk Seri Ismail Sabri Yaakob, who showed up to pay his last respect to the late Samy Vellu at his residence earlier today, described him as the ‘father of the Indian community’.

“The country lost a great leader today. His contribution was immense, not only to the Indian community but also to national development during his tenure as the minister of works,” said Ismail Sabri.

On Twitter, Indian Prime Minister Narendra Modi offered his condolences to Samy Vellu’s family upon learning about his passing.

“Saddened by the passing away of Tun Dr. S. Samy Vellu, Former Cabinet Minister of Malaysia and the first Pravasi Bharatiya Samman Awardee from Malaysia.”

Saddened by the passing away of Tun Dr. S. Samy Vellu, Former Cabinet Minister of Malaysia and the first Pravasi Bharatiya Samman Awardee from Malaysia. Heartfelt condolences to his family. Om Shanti. pic.twitter.com/RkFRSCOTtW

The Pravasi Bharatiya Samman award is the highest honour conferred by India via its’s president to overseas Indians for their contributions in their respective fields. Samy Vellu was presented with the award in 2003.

The late Samy Vellu has been described as a legendary cabinet minister and an ultimate mentor by another former MIC president, Datuk Seri Dr S. Subramaniam.

“His contribution to the nation and to the Indian Community will be permanently etched in our memories. MIED, Aimst University, and Tafe College were his immortal contributions,” the former Segamat lawmaker wrote on his Facebook.

On Facebook, MCA president Datuk Seri Dr Wee Ka Siong said that Samy Vellu’s passing was a great loss to the society and the country.

“The services and sacrifices of the late Samy Vellu during his tenure as MIC president and Cabinet minister will always be remembered.

He also posted on Twitter a picture of him and Samy Vellu arguing with each other in Parliament’s lobby back in 1999.

“Though we had disagreements, at opposite sides of the aisle, he was a good friend. A fighter in many ways. Many debates we had, including the South Indian Labour Fund, as depicted in the picture. Rest in Peace Tun Samy Vellu,” Tweeted Kulasegaran.

Always will remember this pic @ the Parl lobby in 99'.
Though we had disagreements, at opposite sides of the aisle, he was a good friend.
A fighter in many ways.
Many debates we had, including the South Indian Labour Fund, as depicted in the picture.
Rest in Peace Tun Samy Vellu pic.twitter.com/7Zz72UMTsG

Another DAP stalwart Lim Kit Siang said that the country had lost a great son with Samy Vellu’s passing.

“Although Samy Vellu was responsible for my seven-month suspension from Parliament in 1992, there was nothing personal between us as we have the greatest respect for each other,” Lim said in a brief statement.

He also revealed that he had once teamed up with Samy Vellu to help secure extra allocation for the Indian community.

“Whatever our political differences he never took things personally. Rest in peace,” the junior Lim wrote on his Facebook.

Over the years, there have been several golden quotes that were uttered by Samy Vellu to the press or during his speeches at events.

Among the most memorable ones was regarding the increase in toll payments which irked Samy Vellu as he was always being blamed for the hike.

When asked to comment on the matter, Samy Vellu replied by asking whether the public thinks that the toll concessionaires belong to my father.

He also allegedly told the public “jangan membuang air” which literally translated to “not to pee” during a water shortage crisis.