Her descendants have no idea who gave the permission to exhume the historical tomb. 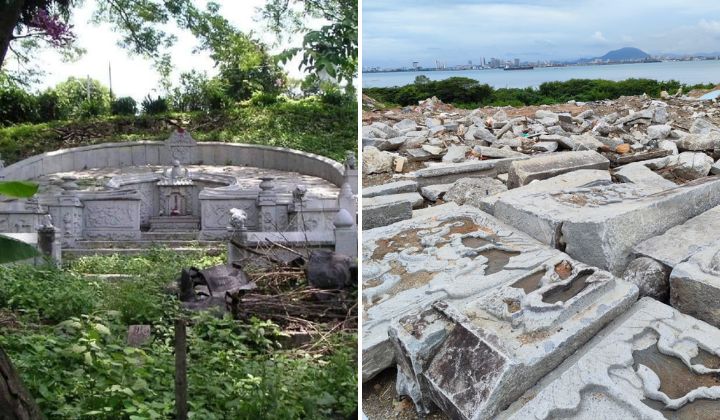 Pieces of the 138-year-old tombstone belonging to Foo Teng Nyong, the third wife of Kapitan Cina Chung Keng Qwee, were allegedly dumped in Penang, without the family’s knowledge and consent.

The tomb, which was described as Penang’s Taj Mahal, was found as rubbles at the dumpsite in Jelutong.

Her tomb was built in the Cantonese style and it’s considered unique due to its Anglo-Chinese East Meets West non-turtle-back design, internal stone crypt, crafted stone masonry and carved panelling.

Penang-based environmental and heritage conservationist Khoo Salma posted several photos of the destruction on Facebook and criticised the Penang government for its mishandling of the state’s most cherished historical artefacts.

As custodian of a World Heritage Site, is this how Penang with its UNESCO sites treats its heritage? The remains of Madam Foo deposited at Batu Gantang, the carved stones of her grave in Jelutong dumpsite and, whither her precious jewellery?

Why was the gravesite demolished?

The gravesite was initially part of the Chung family burial plot at Mount Erskine. However, the land where her grave was is no longer under the family.

The current landowner intends to build a high-rise apartment building on site and published the notice of exhumation for the tomb on 16 February.

According to Malay Mail, Foo’s body has been exhumed and demolished last month despite appeals from her descendant for the tomb to be preserved.

Foo and Chung’s great-grandson, Jeffery Seow, said no one informed him about the exhumation. He added that he didn’t know who gave the landowner permission to exhume the tomb.

Seow sounded the alarm when he got wind of the news and appealed to the Penang Heritage Council and Penang heritage commissioner Rosli Nor to protect the site from demolition.

On 23 May, Rosli allegedly gave his reassurance through an email that there had been no progress regarding the proposed exhumation and demolition of the tomb for development.

Demand for perpetrators to be punished

New Straits Times reported that George Town Heritage Action co-founder, Mark Lay, demanded the fullest punishment under Malaysia’s heritage law against the land owner and developer who are responsible for the mess.

Severe punishment is the only way to teach developers that they can no longer play with Penang’s built heritage. Heritage is simply disposed like garbage in Penang as it gets in the way of developers’ greed.

He also challenged the State Planning Committee and the Penang Island City Council’s (MBPP) Heritage Department to answer to the charges that they had rezoned Lot 1682 (the site of Foo’s tomb) from low rise to 28-storey in May 2022.

In addition, he recommended a 50-year development ban, huge fines, jail time and the tomb be rebuilt exactly the way it was.

Foo Teng Nyong was the third wife of the 19th-century tin mining magnate Chung Keng Qwee, who’s said to be the founder of modern Taiping, now a bustling town in Perak.

Foo died at the age of 33 during childbirth in 1883. She was also the mother of another Kapitan Cina, Chung Thye Phin.

According to The Vibes, Foo was the aunt of Foo Choo Choon, who later became the Tin King of Malaya.