The group believes Najib has served honourably as prime minister but the conviction has tarnished his service and contributions to the country. 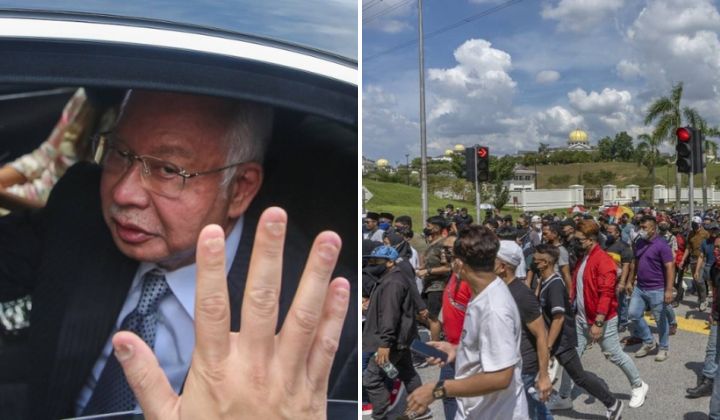 A group of Datuk Seri Najib Razak supporters gathered outside Istana Negara yesterday (24 August) to ask the King to grant the former prime minister a pardon.

The gathering of about 200 loyalists caused slight traffic congestion in the area while police officers kept a close watch.

They also asked other leaders to join them in asking for a royal pardon for Najib.

1. Around 300 people gathered outside Istana Negara today to urge the Yang di-Pertuan Agong to grant a royal pardon to Najib Razak.

According to The Star, the group was allowed to enter the palace compound and submitted a memorandum with two demands to Istana Negara.

First, they asked for a royal pardon to be given to Najib.

In their second demand, they want the Malaysian Anti-Corruption Commission chief commissioner Tan Sri Azam Baki to meet the Yang di-Pertuan Agong and present evidence that there has been a conflict of interest with regard to High Court judge Mohd Nazlan Mohd Ghazali.

Mohd Nazlan imposed a 12-year jail sentence and an RM210 million fine on Najib on 28 July 2020 in the High Court for corruption linked to SRC International Sdn Bhd.

The Federal Court upheld the conviction and fine on Tuesday, 23 August 2022.

Najib attempted to adduce additional evidence during his trial at the apex court and argued that Mohd Nazlan’s employment history with Maybank constituted a conflict of interest. The Federal Court rejected the bid.

A day after Najib was sentenced to jail (24 August), electoral watchdog Bersih started an online petition addressed to the Agong not to grant Najib a royal pardon.

The Malay Mail reported that the petition quickly gained over 10,000 signatures out of its 15,000 target on change.org.

At the time of writing, the petition has gained over 79,000 signatures.

As the rakyat, we had to suffer the impact of corruption by elected officials who enriched themselves with our national wealth instead of using it to develop this country.

The petition said Najib has brought shame to the country. Thus, he should serve his 12-year jail sentence and pay the RM210 million fine as an example to any leaders who abuse their position of authority.

A royal pardon falls under Article 42(1) of the Federal Constitution, which gives the Agong or Sultan the powers to grant a pardon or reprieve a convict.

A royal pardon, once granted, effectively wipes the slate clean for convicts.