The seven bullies are aged between 13 and 17 years old. 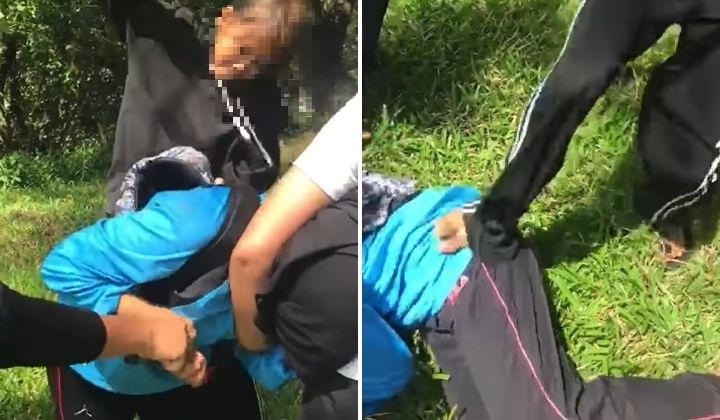 Netizens were shocked and enraged when they watched a video showing a group of female students bullying another female student in Kota Kinabalu, Sabah.

According to Sinar Harian, the video went viral on WhatsApp and Facebook. Netizens urged the authorities to take action against the group of bullies.

7 students encircled the female victim and started hitting and kicking her until she fell.

Two girls held the victim’s arms to prevent her from getting away while another girl hit her on the back.

When the victim fell, they continued kicking her without mercy. Another student in a green shirt bearing the name ‘SMK Inanam’ knelt beside the victim and tried to ask the others to stop their assault.

Student in green shirt that bears the school’s name.

Free Malaysia Today reported that the police had arrested six female students and a former student of SMK Inanam for allegedly assaulting a classmate.

Kota Kinabalu district police chief Zaidi Abdullah said all the suspects are between the ages of 13 and 17. They were arrested after the victim’s father lodged a report yesterday (8 July).

The reasons behind the bullying were not disclosed.

The police are investigating the case under Section 147 of the Penal Code for rioting, which carries a punishment of up to two years in jail or a fine or both.

The police promised to take the case seriously and would not show any leniency over any acts of bullying or violence involving students.

The police would also like to advise the public against uploading or circulating any videos that may cause concern in the community.