The number of registered vehicles increased by one million every year since 2019, says Professor Dr Kulanthayan K.C. Mani. 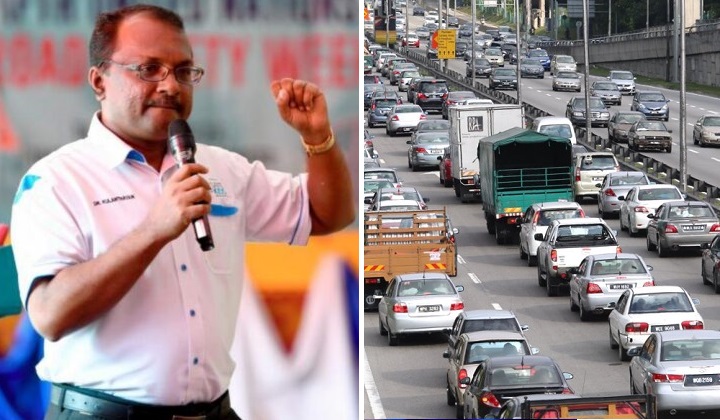 The number of registered vehicles in the country has surpassed the total number of the human population, New Straits Times reported.

According to the report, 47.3% of the 33.3 millions registered vehicles were cars, 46.6 % were motorcycles while 4.7% were goods vehicles. The rest were buses, taxis, self-drive car rentals and others.

This, according to Dr. Kulanthayan has largely contributed to the traffic congestion in the country which had worsened over the years, especially during long holidays.

“What is surprising here is that the vehicle population in 2019 was 31.2 million. Subsequently, it increased by one million every year. In 2021, it was registered at 33.3 million.

“For the first time ever, in 2021, the trend of vehicle population outpaced the human population. Over all these years, it has always been the reverse.

“The vehicle population now is high. If this trend continues yearly where vehicles are rising to the tune of one million, then we are going to face even more horrendous traffic congestion,” he was quoted by the English daily.

He said that he will observe whether the traffic congestion would sizzle down after the weeklong school holiday.

“It was common for traffic to be clogged during festivities and peak hours and then it returns to normal. But looking at the situation now, it is beyond that. Hopefully it will ease.

“If it does not, it means we have a clear cut issue of the overwhelming number of registered vehicles in the country.”

Dr. Kulanthayan also said that the pandemic had brought about domino effects on traffic conditions, while adding that the government’s introduction of the automotive sales and services tax exemption in June 2020, which was extended to 30 June 2022 could also be a contributing factor that led to the soaring number of vehicles in Malaysia.

“Now, we are seeing even more vehicles on the road and this could contribute to traffic jams. That is why you see this happening nationwide and not just in the Klang Valley.

“The pandemic had also caused some to lose income and they had resorted to taking on several jobs which means they are travelling multiple times a day and spending more time on the road. Some may have taken up p-hailing and e-hailing jobs, which was in demand and allowed during the Movement Control Order period.

“Money-strapped families may also have an extra family member going out to work now to sustain their household, what more with the rising prices of food. Now they are forced to work so it adds on to the extra people making travels.

“Whatever work they embark on, it attracts more travel and the use of vehicles,” he added.

Dr. Kulanthayan also advised the government against building more highways or adding more lanes to existing roads as it wouldn’t solve the traffic congestion that we are facing.

“However, there should be more rail-based public transportation because it is much safer compared to road-based transportation due to the presence of various types of vehicles on the road. Rail crash incidences are very low,” he said.

Industries too have a role in reducing traffic congestion

Industries should also play their part in helping to ease the traffic congestion, said Dr. Kulanthayan

Dr. Kulanthayan also said that employers too could reintroduce the work-from-home policy on a rotational basis to help reduce the traffic jam, adding that the policy had worked well during the lockdown.