Other pilots said the charge might set a bad precedent in the future. 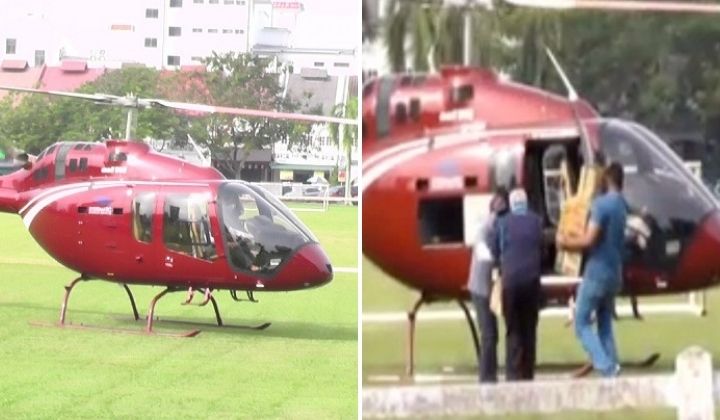 Back in July 2021, a helicopter flown by Mohamed Raffe Chekku drew attention when it landed in the middle of the Padang Ipoh public field in Perak to collect 36 packs of nasi ganja.

According to Free Malaysia Today, Mohamed Raffe Chekku, the managing director of the KL-Kuala Selangor Expressway (LATAR), flew the Bell 505 helicopter he owned from Kuala Lumpur to collect the food.

Initial investigations revealed that the helicopter only had permission to land at the Sultan Azlan Shah Airport (LTSAS), that’s 6km away from Padang Ipoh.

The police said they would conduct investigations on the incident for violating the SOP related to the interstate or interdistrict travel ban.

Pilot to be charged in court

In August 2020, investigation papers were sent to the Attorney-General’s Chambers for further action but there were no further updates about the case until recent days.

Free Malaysia Today reported that the state prosecution director’s office has made a decision to charge the helicopter pilot for deviating from his flight plan and landing at a location other than specified under Rule 77(2) of the Civil Aviation Regulations 2017.

This decision shocked many experienced aviators because it’s normal for helicopter pilots to make quick landings in open areas along their flight routes, as long as they have clearance from air traffic control.

If convicted, the suspect faces a fine of up to RM50,000, imprisonment of not more than three years or both.

The suspect is scheduled to be charged at the Ipoh Magistrate’s Court on Monday, 9 May.

Mohamed Raffe Chekku said he was shocked at the charge because records showed his landing was done with the relevant Air Traffic Control (ATC) clearances.

Buying ‘nasi ganja’ was a decision made on the way. What I did was not a crime. In any case, I have faith in our legal system and will leave it to their good judgment.

A pilot told Free Malaysia Today said the charge will set a bad precedent as it’ll curtail the flexibility of flying helicopters.

As long as pilots inform the ATC and get clearance, they don’t even have to give reasons for their landing. So we are shocked that the Attorney-General’s Chambers has decided to charge the Bell 505 helicopter pilot involved in the incident, especially when he had the ATC clearance.

Another pilot, a former senior RMAF officer, believed the authorities might be acting under duress due to public pressure since they were outcries on social media last year.

He said the Attorney General’s Chambers should have consulted the Civil Aviation Authority of Malaysia (CAAM) to get a clearer picture before proceeding with a charge.

His actions did not result in the government losing any revenue nor did he cause any public nuisance, and it was never a threat to security. It may have been morally wrong under the circumstances, but this does not constitute a crime

No Robbery Or Fire Incident At Genting Highlands, Police Says