The crowd at Mydin jostled and reached over each other to get fish from the counter. 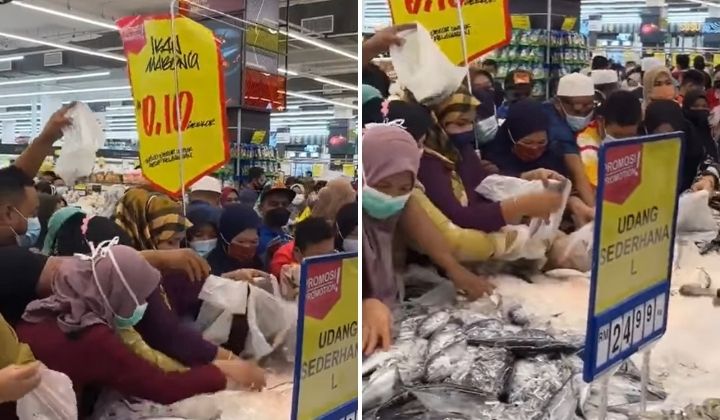 Many people were out of work and income when the prolonged lockdowns happened. Unfortunately, the hard times are possibly reflected recently during a sale at a Mydin store in Kelantan.

A Facebook user shared a video showing a throng of people jostling at the fish section at Mydin Tunjong, Kota Bharu.

There was a large crowd at the store because the fish were sold as low as 10 sen. Men and women could be seen reaching over each other to grab as many fishes as they could into plastic bags.

Netizens were shocked to find that the people broke the current physical distancing SOPs. They said even if the fish are sold cheaply, people shouldn’t have to fight among themselves this way.

Netizens added that if the crowd wasn’t careful, they might start another Covid-19 cluster.

Other people pointed out that it was also the perfect time for pickpockets to grab some cash and valuables from customers.

A few netizens blamed the crowd’s behaviours on the current economy in the country.

Despite this, some netizens acknowledged that it was a good promotion but the execution of the sale could be done better.

They suggested the store wrap up a fixed number of fish so it could be distributed to customers in packets in an organised manner.

The store could also set conditions such as limiting the number of fish that could be purchased by each customer.